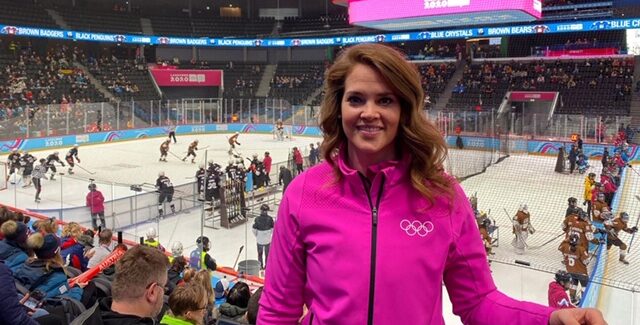 History continues to be made in the sport of hockey. For the first time in the game’s history, a woman will hold the position of General Manager. On Wednesday, long-time Swiss women’s goaltender Florence Schelling was named the General Manager of SC Bern in the Swiss Men’s Hockey League. She becomes the first female GM in pro hockey.

SC Bern, the perennial Swiss hockey powerhouse with European hockey's highest attendance and turnover, has named Florence Schelling, 31, as new General Manager. Schelling, one of the most accomplished female hockey players in the world, will become first female GM of a pro club. https://t.co/OyunCrZBTh

“In the evaluation process, we ended up with Florence Schelling,” Marc Lüthi, SC Bern’s CEO, told Berner Zeitung when asked why they ultimately hired Schelling. “We came to the conclusion: Florence is the person we are looking for and want. Yes, Florence will be a pioneer, probably worldwide in her new role. But she’s young, fresh, she’ll bring a new perspective and break up existing structures”

SC Bern wanted to find a proven team manager on the market but could not find one. They were looking for someone young, fresh, visionary, and intelligent. They looked at what the market had to offer but came to the conclusion that there was nobody out there for them with a proven track record. So, they decided to go in a completely new direction. The result? Hiring Schelling for what she had done on the ice with Swiss Ice Hockey.

Schelling is one of the most accomplished female hockey players in the world. Not only that, but she attended Northeastern University and started on their women’s hockey team. In addition, she holds a master’s degree in business administration. At Northeastern, she made a name for herself in her four years.

For her career at Northeastern, she played in 98 games and posted a 1.74 goals-against average and .940 save percentage. But things were just getting started. She also put Switzerland women’s ice hockey on the map. With Schelling in net, Switzerland improved year by year, until the hard work finally paid off.

Schelling backstopped Switzerland to their first medal at the IIHF Women’s World Hockey Championships in 2012, defeating Finland in the Bronze medal game. Schelling was named the best goalie for the tournament and a member of the media All-Star team. She put Switzerland hockey on the map. That continued into the 2014 Olympics in Sochi, where she again backstopped Switzerland to their first Olympic medal ever, a bronze. She made 252 saves in the tournament and was named the most valuable player, best goaltender, and a part of the media All-Star team.

Schelling finished up her decorated career as a player in 2018. She had been coaching the U18 national women’s team before being announced as the new GM of SC Bern.

Schelling will start her new role after Easter and former GM Alex Chatelain will remain with the club as head of the task for sports strategy development and a part of the analytics division.

Hockey continues to progress. First, Cami Granato was named a scout for the new Seattle franchise coming into the NHL. Now, Schelling is the first female GM for any pro sports team in any league. However, Schelling is ready to take the challenge head-on and is looking forward to it.

“After talking to the SCB officials, it was clear: I want to take on this challenge,” Schelling told the Swiss outlet, SRF.