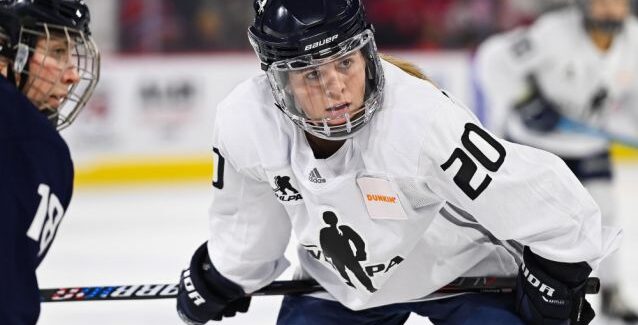 Hannah Brandt is a three-time World Champion, an Olympic Gold Medalist, a U18 World Champion, a World Championship Silver Medalist, a three-time NCAA National Champion and an Isobel Cup Champion. Yet, somehow, she still is one of the most underrated, undervalued players in the sport today. Brandt has done nothing but produce, win, lead and play a responsible style of hockey, yet her name never seems to come up in conversation when discussing the top players in the game today.

If you watched the first two games of the Secret Dream Gap Tour this past weekend, you would have seen just how good Brandt is as a player. She can chip in points, move the puck in the right direction, play a responsible game and help on both special teams units. Players like that are extremely valuable, and Team Adidas (Minnesota) is lucky to have her down the middle.

Brandt didn’t register a point this past weekend, but her line routinely tilted possession and she finished the weekend with a +4 rating. Her team was headed in the right direction when she was on the ice, and although she doesn’t officially get points for that she absolutely gets credit. Her ability in the faceoff circle and ability to gain the offensive zone help create for Team Adidas.

On Saturday night, she entered the offensive zone with control on three occasions. She also dumped the puck in for her teammates on six occasions, which was a smart move considering the forecheck that Team Adidas had going in that game. She also safely exited the zone 50% of the time in the game, transitioning Team Adidas from defense to the attack.

Brandt was a gifted scorer in college with the University of Minnesota, scoring a career-high 82 points (33 g, 49 a) as a freshman in 2012-13. Her lowest output was an outstanding 64 points (25 g, 39 a) in 36 games as a senior in 2015-16. Throughout her career, she dominated the NCAA. Not only did she produce offense and play a strong two-way game, she also led. Brandt was the Golden Gophers’ captain in her senior season.

After playing a season for the Minnesota Whitecaps (2016-17) while they were an independent franchise, Brandt represented the United States at the 2018 Winter Olympics. Yet again, she impacted every phase of the game. She scored two points (1 g, 1 a) in five games and was one of the team’s most responsible players on their way to a Gold medal.

And let’s not forget her strong season in the NWHL with the Whitecaps. Brandt scored eleven points (5 g, 6 a) in 16 games with Minnesota in 2018-19, then added a pair of goals in two playoff games as the Whitecaps won the Isobel Cup. Oh, she also wore an “A” for the league’s best team that season.

“She is one of the most underappreciated players in the game today,” Team Women’s Sports Foundation coach Bill Flanagan said. “She is unbelievable at both ends of the ice. She wins battles consistently, is strong when it comes to faceoffs. Honestly, anything you need done, she can do it and she can do it well. She’s truly a coach’s dream player, I really mean that.”

She’s dominated at every level of the sport, yet never gets the same respect that her teammates with the National team get.

That needs to change. When you tune in to NBCSN on Saturday afternoon to watch Team Adidas take on Team Women’s Sports Foundation at the United Center in Chicago, keep an eye on Brandt. She may not light the scoresheet on fire, but we promise you that she will do all the little things that help a team win. She’s that good of a player, and it’s long past due that people start to realize it and talk about it.