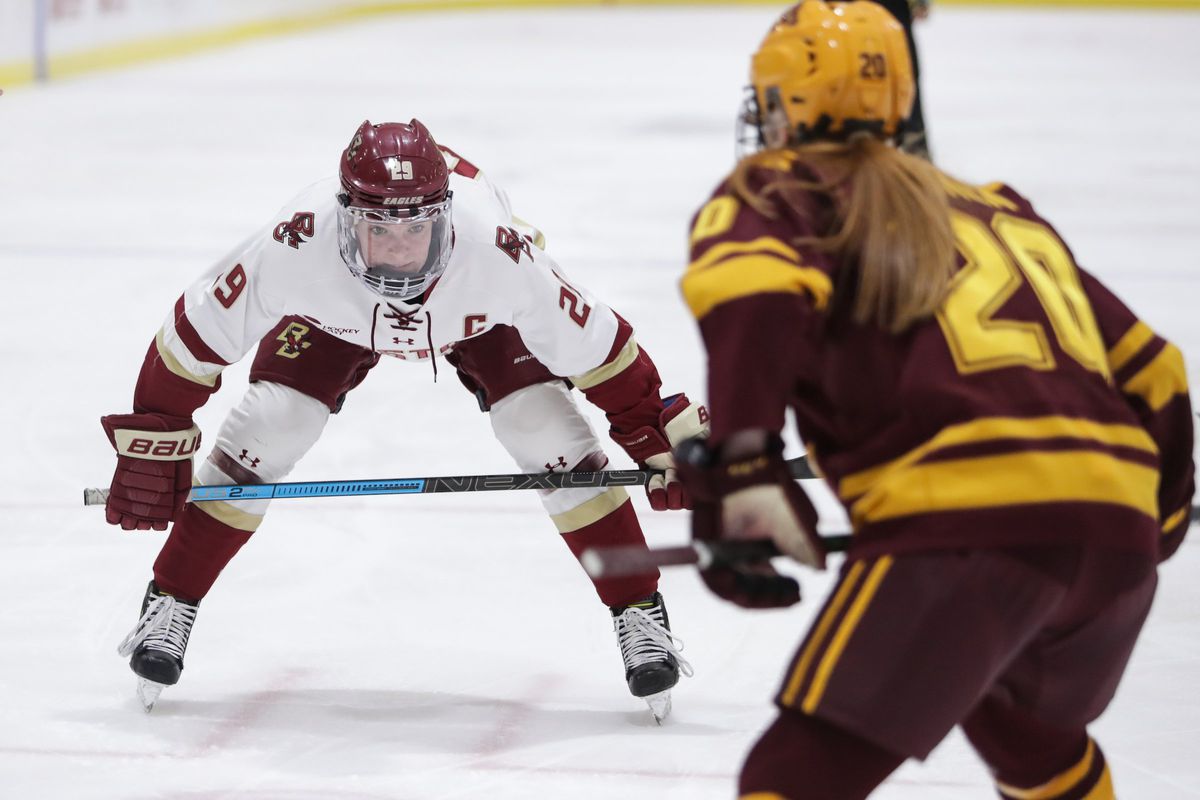 First and foremost, we hope you all had a terrific Thanksgiving weekend! Now that you are back to the grind, we’re sure that you’ll be looking to kill a little company time on this first morning back in the office. Luckily, we have just the thing for you! It was a wild weekend in college hockey, with holiday tournaments taking place throughout the country.

The marquee event was in Nashville, where #1 Minnesota, #2 Wisconsin, #8 Boston College and RV Harvard battled. Meanwhile, Minnesota State, Clarkson, Vermont and Penn State all met up in Vermont for a weekend tournament. There was also some history made on Sunday as we turned the calendar to December.

The Crusaders did it again on Sunday afternoon. It was the lone game on Sunday, as all eyes were on Lawler Rink. The Crusaders, dealt an 11-0 loss to Northeastern on Friday night, proved that they were an improved, more composed team than a year ago on Sunday.

Emma Lange scored her first career collegiate goal, while Jada Brenon had a rebound game collecting her first collegiate shutout in a 1-0 victory for the Crusaders. Holy Cross outshot Merrimack 23-18 in the final forty minutes and truly dictated the pace of play after Lange’s goal.

The victory marks the first ever season series sweep over an opponent for the Crusaders. It also gives them three wins in Hockey East play, giving them a cushion on last place Merrimack. Entering the week, Holy Cross is now just one point behind Vermont for the final playoff spot in the conference.

First of all, allow me to say what a great showing by hockey fans in Nashville at the ‘Country Classic’ over the weekend. The atmosphere was electric and the building was packed as four of the best teams in the nation battled it out. That’s exactly how it should be.

It started on Friday with a thriller between #1 Minnesota and #8 Boston College. The Eagles got a Kelly Browne shorthanded goal 15:35 into the second period to actually take a 2-1 lead, which they held going into the third. Grace Zumwinkle scored at 9:34 on the powerplay to even things up, eventually forcing overtime.

The extra frame decided nothing, and the sides skated to a 2-2 tie. Delaney Belinskas (BC) and Taylor Wente (Minnesota) also scored in this one. The tie isn’t what they wanted, but for the Eagles it’s a very nice result. This is a young team still learning their way, and this game proved they can hang with the very best in the nation.

In Friday’s second game, Wisconsin proved they are one of the best in the nation yet again. The Badgers blitzed Harvard, outshooting the Crimson 57-15, including 20-3 in the first period. Lindsay Reed gave her team a puncher’s chance, holding Wisconsin to just one goal through forty minutes. The dam finally broke in the third as the Badgers poured in four goals to take a 5-1 decision.

Presley Norby scored the game-winner at 2:23 of the third, while Daryl Watts, Brette Pettet and Alexis Mauermann added insurance markers. Kristi Della Rovere had the lone Harvard goal to make it 2-1 at 7:50 of the third period.

On Saturday, Minnesota shutout Harvard 4-0. The Golden Gophers outshot the Crimson 43-21 and got a pair of goals in both the second and third periods to lead the way. Olivia Knowles, Alex Woken, Abigail Boreen and Sarah Potomak lit the lamp in the victory. Wisconsin, meanwhile, scored a 5-3 win over the Eagles in Saturday action.

Overall, a very strong showing for the top two teams in the country down south.

Vermont was the home to the weekend’s other big event, as the Windjammer Classic took place up in Burlington. Unfortunately for the hosts, the weekend couldn’t have gone much worse. The Catamounts were shutout in both of their games, dropping a 4-0 decision to Penn State on Friday and a 2-0 contest against Minnesota State in Saturday’s consolation game.

Minnesota State was on the other side of a shutout on Friday, as #7 Clarkson shut them down en route to a 4-0 victory. The Golden Knights got goals from Elizabeth Giguere, Taylor Sawka and Brook McQuigge, while Giguere added her second of the day to make it 3-0 early in the middle frame.

Clarkson shutdown Penn State in similar fashion in Saturday’s championship game. Giguere scored her third of the weekend just 4:51 into the contest, while Kayla Friesen and Kristy Pidgeon added insurance markers in a 3-1 victory for the Golden Knights. Mallory Uihlein scored the lone goal against the Golden Knights on the weekend. It came at 12:43 of the third period on the powerplay.

If you didn’t think the Ohio State Buckeyes were for real coming into last weekend, well it might be time to think again. The #6 Buckeyes split a key series with #3 Cornell, a Frozen Four team from a season ago.

The Buckeyes snagged a 3-1 victory on Friday on the strength of two Emma Maltais goals. Her tallies, less than seven minutes apart late in the second period, tied the game and gave Ohio State the lead. Madison Bizal put it away for Ohio State with the insurance at 11:40 of the third period.

Ohio State was a good group a season ago, but not quite a tournament team. Even after losing on Saturday 5-1, this was a strong showing for the Buckeyes. They got a signature win, which is huge for them moving forward. In the toughest conference in hockey, the Buckeyes will need to prove they belong among the game’s elite. They did that this weekend.

This was a solid step forward.

Best Of The Rest

Northeastern had a frustrating weekend against Maine a week ago. They took out their frustrations on Holy Cross Friday night, scoring an 11-0 victory. Chloe Aurard and Katy Knoll each picked up five points, becoming the first Huskies to do that in a game since Kendall Coyne and Denisa Krizova pulled the trick against Maine in 2016.

The Huskies and Crusaders finish their season series on Wednesday night in Worcester, the final game before the holiday break for both sides.

Maine and Dartmouth split a weekend series in Hanover, as Maine scored a 6-1 victory on Friday night before Dartmouth stormed back with a 5-2 decision on Saturday.

#9 Minnesota Duluth split the weekend, suffering a surprising 4-2 setback to Quinnipiac before upending UConn 5-1 on Saturday. The Huskies were swept on the weekend at the Nutmeg Classic, losing to UMD after a 6-2 loss to Yale on Friday.

The Bobcats completed a weekend sweep with a 3-1 victory over Yale. The Bobcats have now knocked off the #9 team in the country and tied the Clarkson within the last week and a half. Don’t be surprised if they start to receive votes.