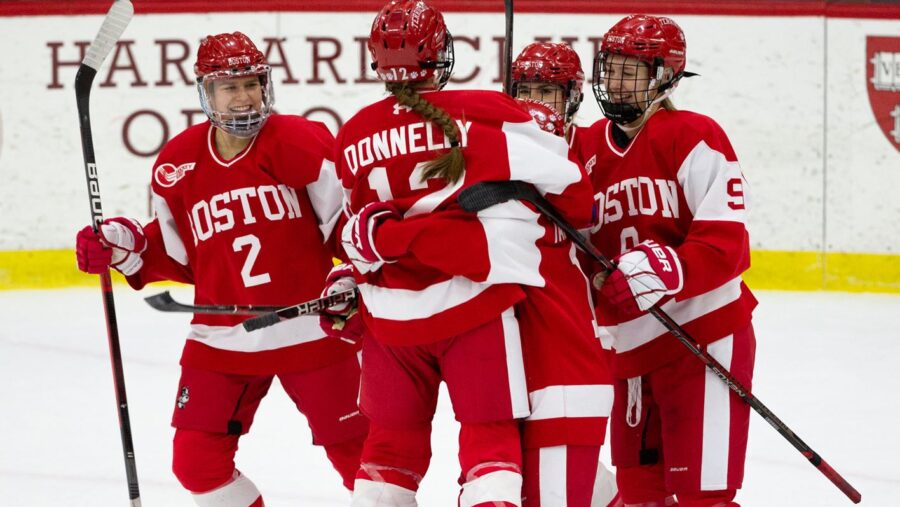 It was a short weekend in the women’s hockey landscape, as NCAA teams battled it out on Friday and Saturday before a silent Sunday. Teams are starting to close out the first semester as well, as the slate of games will thin out significantly until after the holiday season.

That said, there were some key matchups over the weekend, including the ‘Battle of Comm Ave’, a top ten matchup between Wisconsin and Minnesota Duluth, and another key test for an up-and-coming Quinnipiac team looking to garner some votes in the top ten.

#9 Boston University will, without doubt, be moving up the rankings this week. That’s thanks to the fact that they swept #8 Boston College in a home-and-home set over the weekend. Game one wasn’t particularly close either, as the Terriers rolled to a 6-0 victory at Walter Brown Arena.

BU had five different goal scorers in the victory, including one from Jesse Compher with brother JT and the Colorado Avalanche in town. Emma Wuthrich, Sammy Davis and Courtney Correia all chipped in goals, while MacKenna Parker added a pair in the victory.

Corinne Schroeder continued a terrific start to her season, turning aside 21 shots in the shutout victory. She’d make 25 more saves on Saturday, surrendering just one goal in the Terrier road victory.

Davis kicked off the scoring on Saturday with a powerplay goal midway through the contest, beating Maddy McArthur 11:23 into the period. BU carried their lead into the third period before the Eagles took to the powerplay at 9:54 of the frame when Natasza Tarnowski took a checking penalty. Kelly Browne rifled her 8th of the season behind Schroeder less than 30 seconds later to even the tilt on the powerplay.

Only 2:10 after Browne’s goal, however, BU took the lead back on Abby Cook’s 5th of the season. It too was a powerplay goal, as special teams won the day.

BU’s two victories were huge. They pushed the Terrier to 7-4-1 in Hockey East play, tied for third with UNH. It also keeps Northeastern (11-2-0) in first place ahead of the Eagles, who have 21 points compared to NU’s 22. The Huskies have also played three less games in conference this season, and firmly control their own destiny.

Last week, Wisconsin retook the top spot in the weekly USCHO poll. Over the weekend, they swept #10 Minnesota Duluth to flex their muscles just a little more. The Badgers got a stiff test on Friday, as the Bulldogs went to Madison and gave the top team in the country everything they could handle.

Abby Roque scored just 70 seconds in to give the Badgers the lead, but McKenzie Hewett evened the score 59 seconds later. That response goal was huge for the Bulldogs, who parlayed that momentum into a strong first period. Anna Klein gave UMD the lead at 5:48 off a feed from Kylie Hanley, but the dangerous Daryl Watts struck at 6:18 to once again tie the score.

The sides battled through a scoreless second period, setting the stage for a thrilling third. Roque nabbed her second of the tilt at 5:43 to give the Badgers back the lead, but Klein would not be outdone. The veteran picked up her second of the game at 17:22 to even things up. It looked like, in the moment, that overtime was on the horizon. Instead, it was just heartbreak for the Bulldogs as Alexis Mauermann broke the tie with only 1:15 remaining in regulation.

That goal would be enough, as the Badgers escaped on home ice with a thrilling 4-3 victory.

The Badgers, feeling good after Friday, took care of business on Saturday with relative ease. Sophie Shirley (x2), Maddie Rowe, Britta Curl and Mauermann all lit the lamp, pacing the Badgers to a 5-2 win over UMD in the weekend finale.

With the pair of victories, there really should be no doubt who the number one team in the nation will be this week. These were two statement wins over quality competition for the Badgers, who are clicking on all cylinders right now.

Here is how the other teams in the USCHO.com Top Ten fared over the weekend.

#2 Minnesota played just one game this weekend, travelling to Prior Lake to take on Minnesota State in the 2019 US Hockey Hall of Fame Museum Game. The Golden Gophers did what they needed to do, blanking Minnesota State 4-0. Madeline Wethington, Taylor Heise, Amy Potomak and Emily Oden paced the Golden Gopher offense, while Sydney Scobee made 18 saves for the shutout.

#3 Northeastern did not play over the weekend, but did score a 7-0 victory over Holy Cross on Wednesday night. The Huskies had seven different goal scorers in the victory, and will enter the break as the top team in Hockey East. Northeastern also swept Holy Cross for the first time in program history, shutting them out in all three dominating victories.

#4 Cornell completed a tough weekend sweep, hitting the road to battle #6 Princeton and UR Quinnipiac. The Big Red enter the new week with two dominating victories. It started Friday with a trip to New Jersey, where the Big Red blitzed the Tigers.

Grace Graham scored a hat-trick as part of five unanswered goals (Paige Lewis, Micah Zandee-Hart) that built a 5-0 lead for Cornell. Maggie Connors got one late, but it proved to make no difference in a statement victory for the Big Red.

The Big Red completed the impressive weekend sweep with a 4-1 decision over the Bobcats in Hamden, CT on Saturday. Lewis, Finley Frechette, Kristin O’Neill and Gillis Frechette paced the offense in this one.

#5 Ohio State had the weekend off. They will return to action on Saturday in Vegas when they battle the #6 Princeton Tigers in a pair of games. The Tigers are coming off of a weekend split, having lost to Cornell on Friday before defeating Colgate 7-5 on Saturday.

#7 Clarkson outscored opponents 10-3 over the weekend, blanking RPI 5-0 on Friday night and edging Union 5-3 on Saturday. The Golden Knights are off until January 10th, and head into the break with a 14-2-4 record on the season.