Kimberly Sass is one of the more vocal and influential members of the PWHPA, boosting the organization’s brand on social media and getting involved at a board level. Sass, an East Amherst, New York native and one of three Buffalo-area players training in Western New York, is starting a new journey this season.

After training out of the Tri-State region a season ago, Sass will suit up for the New Hampshire Regional Training Hub in 2020-21. With no Hub being based out of Buffalo, and with the US/Canada border currently closed, Sass elected to try out in New England. She made the team, and will be a big part of the Training Hub’s plan in goal this season.

Sass played her college hockey at Colgate, joining the program as a freshman for the 2008-09 season. Sass got her heaviest workload as a senior, playing in 33 games for the Red Raiders in 2011-12. After that busy season, a year in which she posted a .908 save percentage, Sass was not heard from again on the ice until 2015-16.

That’s when she joined the NWHL, suiting up for the Buffalo Beauts. She’d play two more seasons in the NWHL, 2017-18 and 2018-19, with the Metropolitan Riveters. Sass joined the PWHPA, training out of the Tri-State region, in 2019-20.

With Sass starting her new journey in New Hampshire this season, we sat down with her to discuss her start in hockey, her transition to the PWHPA, how her experience has been so far and much more! 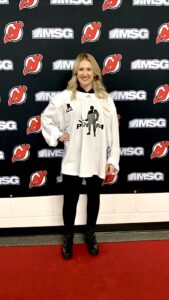 KS: My Dad was a goalie when he was growing up! My parents got my sister and I involved in figure skating at a young age. We switched to ice hockey when I was 7, and I quickly tried the goalie position and never went back. Goaltending was something I got to share with my father, and he was actually my goalie coach until I went to college! We loved discussing how I could continue to improve my game, and our hopes and dreams for my future in hockey. There were a lot of car conversations to and from practices and games!

KS: I immediately was on board for the mission of the PWHPA. The organization is all about taking a stance for what you deserve. After experiencing the drastic difference between the college hockey experience and professional hockey experience, I knew it was time to stand up for our sport.

KS: My play in the PWHPA and involvement on the Board has felt more meaningful than any other year of professional hockey that I have played. All of our efforts in the ‘Dream Gap Tours’ and our continued participation is going towards setting up a professional future league as soon as possible, and that feels very gratifying.

KS: My favorite memory was winning three ECAC awards as a Freshman at Colgate University, and attending the awards dinner with my parents and coaches.

KS: The unpredictable nature of this year with the COVID-19 pandemic, and my 30th birthday, have led me to be more cognizant of my time left on the ice. I have been trying to embrace every moment I have to be on the ice, work hard and have fun. Similar to last year, I would like to continue to spread awareness of the PWHPA and our mission, and have fun with my New Hampshire Region teammates while doing so! I think our region is aiming to be as competitive as possible so we can bring home some prize pot dollars thanks to Secret!