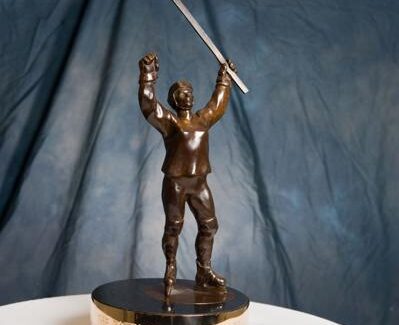 The 2020 Patty Kazmaier Award winner will be revealed on Friday, March 27th. The announcement will come at 1:30 pm on USA Hockey’s Facebook and YouTube channels. It will be done with the “premiere feature”. Highlights of the top ten finalists will be shown and the winner will be unveiled, per USCHO.

The formal Award brunch and ceremony was scheduled for March 21st in Cambridge, Massachusetts. That was slated to be part of the 2020 NCAA Women’s Frozen Four weekend. The Frozen Four was set for Boston, with Boston University serving as the host school on March 20th and 22nd.

The NCAA Tournament, along with all the other winter championships, was cancelled prior to the Quarterfinal round due to the COVID-19 outbreak.

Northeastern, Clarkson and Wisconsin were all slated to take part in the tournament. All three will have a representative in the top three for the Patty Kazmaier Award. Northeastern’s Alina Mueller, Clarkson’s Elizabeth Giguere and Wisconsin’s Abby Roque are the finalists.