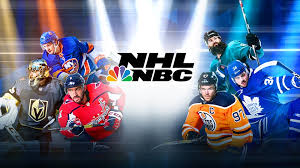 March 8th will be a historic day in hockey. NBC Sports Network will air the NHL’s St. Louis Blues and Chicago Blackhawks, a key Central Division rivalry game. That, in itself, isn’t news. What is, however, is the broadcast crew that will bring that game into the living room of America. Kate Scott will handle play-by-play duties for the broadcast, while Kendall Coyne-Schofield will be inside-the-glass and AJ Mleczko will handle the analyst role.

In addition, Kathryn Tappen will anchor the coverage back in the NBC studios, while Jen Botterill will join her to provide analysis. Rene Hatlelid will lead game production, while Lisa Seltzer will direct the broadcast.

This will be the first ever NHL contest broadcast and produced solely by women in the United States. It also happens to take place on International Women’s Day.

A far overdue all-women broadcast is extremely exciting. Tappen is, in my opinion, the best studio analyst currently working NHL games, while Coyne-Schofield has emerged as one of the up-and-coming game analysts in the last year. Mleczko’s work at the 2018 Winter Olympics and subsequently on NHL broadcasts has been terrific, while Scott has a lengthy and impressive resume doing play-by-play work.

All of these women are extremely qualified to be working this game. This isn’t some sort of PR move by the network. This is NBC giving these women a real chance to ply their trade at the NHL level. It’s refreshing to see, quite frankly it is long overdue.

Producer Kaitlin Urka agrees with that sentiment. This isn’t just for kicks. This is a chance for the network to showcase some extremely talented women who are good at what they do.

Women getting chances to broadcast NHL games might not seem like much at first glance, but it’s a pretty big deal. Quite frankly, this is an important moment for women in hockey and in the field of broadcasting. Just ask Tappen, who has a lengthy history in the field and yet has never experienced something like this.

“I’ve been broadcasting for 17 years, and yet, the very first broadcast I did with a female producer was just two years ago,” Tappen said in a report. “The fact that we are celebrating International Women’s Day with an all-female broadcast and production team tells me how far we have come in a very short time. We hope our broadcast will help inspire young women watching to follow their dreams, because we’ve proven that anything is possible, and I’m proud to be a part of it.”

The night’s coverage kicks off at 7:00 pm eastern on NBCSN with NHL Live. Following the game broadcast the network’s postgame show, NHL Overtime, will air.