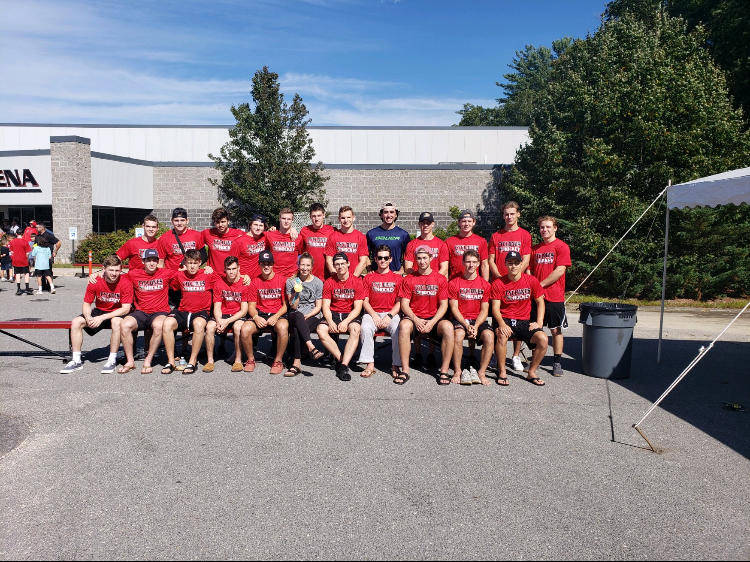 This is a guest post by Joshua Boyd, who joins us here at The Women’s Hockey Tribune to report on a major story out of the USPHL.

There is one particular player on the ice at Northern Cyclones practices for their National Collegiate Development Conference team that immediately commands attention.

This player is moving at an elite-level pace that not many in the junior ranks have seen on the same ice surface, and making the correct decisions in split-second time.

Indeed, the Cyclones are practicing with an Olympic Gold Medalist in 2018 women’s hockey champion Kali Flanagan. She was named a new NCDC assistant coach earlier in September for the Cyclones.

“Watching her practice, her poise with the puck is at an elite level, and she makes more smart plays than I’m used to,” said Cyclones captain Will Gavin. “She’s not only coaching us, she’s out there practicing with us, training towards the next Olympics.”

“I’ve been around the program for so long. I grew up playing with boys with the Cyclones, so it’s good to be able to give back to the Cyclones program that gave me so much,” said Flanagan. “[The NCDC players] are all fast, skilled and talented. It’s a great group of guys, and it’s going to be a fun year.”

The Cyclones interviewed other players for the assistant coaching position, but none could match the hockey ID and literally Golden resume of Flanagan.

“I think it was a no-brainer, and she’s the one who came to me with the idea,” said Cyclones Owner and NCDC Head Coach Bill Flanagan. Bill is also Kali’s father. “She’s been around the game since she was in diapers watching Daddy coach. She wants to see if she wants to make a career out of coaching.”

A defenseman herself, Kali Flanagan worked with the Cyclones blueliners during the preseason and that is expected to be her area of specialization throughout 2019-20.

“She did a great job handling the defensemen in our first scrimmage [on Sept. 10], her first time on the bench for a game,” said Bill Flanagan. “It’s a feeling-out process for her. I think as we go forward, she’ll become more vocal. Right now, she’s observing and is in my ear about what she thinks about certain players and certain ways to do things.

“She’s already talking about getting the defensemen more active and involved, to be confident and make plays,” Bill Flanagan added. “Being a dynamic defenseman herself, she wants our defensemen to be well-rounded and sound both offensively and defensively.”

Gavin said that he and his teammates are certainly excited to work with a player and coach of Kali Flanagan’s caliber, as her voice of experience will carry a lot of weight.

“She’s seen what the higher level looks like, having played in so many high-pressure situations,” said Gavin. “It’s a different perspective. The women’s game is a little different, but she could teach us a lot that we don’t know.”

Kali Flanagan began her hockey career as a forward, before moving into defense full-time at the Squirt (10-and-under) level.

“I wasn’t happy about it at the time, but I learned to love playing defense and being part of the rush as well,” said Flanagan, who started as a figure skater until she switched to hockey at age 6.

By Middle School, it was becoming clear to the Flanagan family and all who knew Kali that she was separating herself from her hockey peers, both boys and girls. She began to make some of the highest-ranked teams available to young women – and in high school, USA Hockey came calling for the first time.

“I was invited to the Under-18 World Championship 28-person camp in my junior year of high school. I didn’t make that team, and I asked myself, ‘Am I going to get better from here, or just let it be what it is?’” Kali said. “I made the decision that making Team USA was 100 percent what I wanted to do. I had wanted to make the Olympic team from the time I was a little girl, and I knew it’s something I could possibly achieve if I put the time in.”

Skating essentially every day, working hard before and after practice, going to bed early, eating right – Flanagan stuck to the work needed to achieve that Olympic dream.

“If I set my mind to do something, it has to be done all the way,” she said.

One bullet list item happened when she received a scholarship offer from, and played for, Boston College.

USA Hockey first brought her on board with the Under-22 team, “but I still didn’t have a sniff at the senior women’s team.”

Finally, in her junior season (2016-17), she made the senior team and helped Team USA win the World Championship that spring in Michigan. That December, USA Hockey named Kali to her first Olympic Games.

For the fifth time, Team USA found itself up against Team Canada for the Gold Medal. After four straight Gold Medals won by Canada, Team USA said “enough is enough,” and climbed to the top of the podium together.

“It’s so hard to describe. It’s a surreal, special experience just to be able to represent your country in the Olympics,” said Kali. “To be able to bring home Gold to the USA for the first time in 20 years was just amazing.”

“She’s a great person, No. 1, so at the end of the day I’m a proud father, always,” said Bill Flanagan. “She’s superseded everything I could possibly imagine. At the end of the day, this is all gravy, to spend quality time together to do something together that we both love doing. It’s going to be fun.”

“She’s been through it all,” said Gavin. “She was recruited to play Division 1 college hockey, and everyone on our team is aspiring to play college hockey. She knows what it takes to reach that goal, and even another step beyond that.”