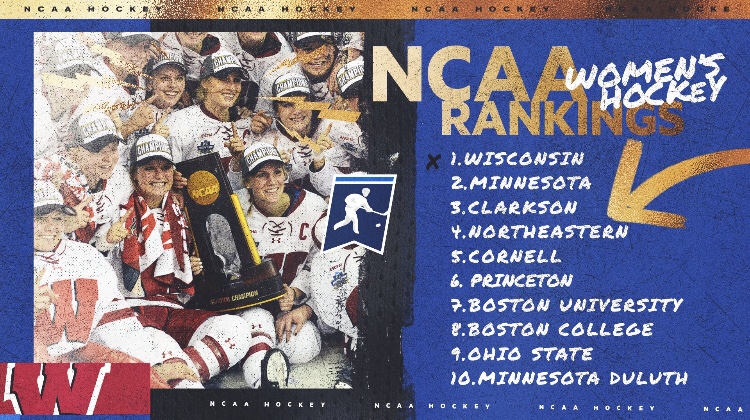 College hockey season is right around the corner. Exhibition games are slated to start in the coming weeks, while the regular season is right behind. On Monday, the first NCAA rankings of the season were released, and the defending champions are once again leading the way. The Wisconsin Badgers will enter the season as the number one ranked team in the nation, followed by their rivals from Minnesota. The Golden Gophers fell to the Badgers 2-0 in the National Championship in March.

Clarkson is the first ECAC team on the list, clocking in at number three. Northeastern is the top ranked Hockey East team at four, while Cornell checks in at number five. Cornell defeated Northeastern 3-2 in overtime at Matthews Arena in the Quarterfinal last March.

Princeton (6), Boston University (7), Boston College (8), Ohio State (9) and Minnesota Duluth (10) round out the first top-ten rankings of the season. Boston University is the only team ranked inside of the top-eight that did not make the tournament a season ago. Syracuse was the eighth seed after winning their conference.