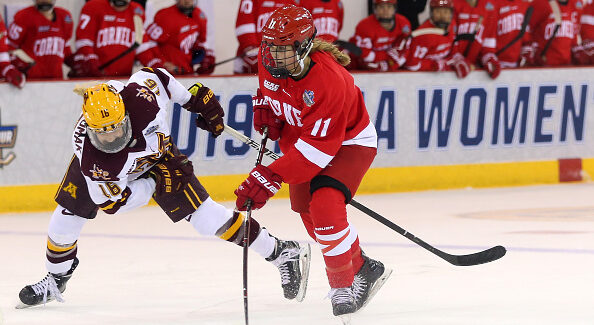 It was a historic night inside Cyclones Arena as the Elite Women’s Summer Hockey League resumed play for Week 3. Making her debut in the league, Gillis Frechette records a four-point night to lead Team Red to back-to-back victories. Team Red defeated Team Blue by a score of 8-3. This was the most goals scored in league history.

Frechette became the first player in league history to record a hat trick. In addition to that Frechette tied for the lead league in goals with Emily Field of Team Blue and Alex Carpenter of Team Red in just her very first game. Frechette just wrapped up her junior season playing for Cornell University. She is hoping her to play her senior season whenever they will be. Frechette made an impact right away recording her first point on the first goal of the night by Savannah Norcross. But Frechette was just getting started. When Team Red needed timely goals Frechette was right there. It was an impressive debut as she won the player of the game.

Two more newcomers made impacts for Team Red. Defenseman Savannah Norcross recorded three points (two goals and one assist) and goaltender Dana DeMartino stopped 12 of 13 shots in the second half to preserve the victory for Team Red. By looking at the score you would have thought Team Red had a relatively easy night. But that was not the case.

It was a pretty evenly matched first period as Brittany Ott started the first half for Team Blue and two weeks ago first-star goaltender Katie Burt started for Team Red. While Team Blue dominated the shot total, Team Red was able to take advantage of a three-minute mental lapse by Team Blue. Norcross opened the scoring for Team Red. And 46 seconds later on an own goal by Megan Keller, Frechette gets credited with her first of the night. From there the flood gates opened.

Carpenter continues to remain red hot as she made it 3-0 for Team Red. Team Blue cut the lead two 3-1 on a goal by Paige Voit. That broke the shutout streak of Katie Burt from two weeks ago. Late in the period as she did two weeks ago Michaela Boyle increased the lead for Team Red making it 4-1. It was Boyle’s second goal of the season. Picking up the assist on Boyle’s goal was Abby Volo. Volo was making her debut in the EWSHL. It was a big night for her. More on that later.

As the second half began DeMartino was tested early. She stopped the first 11 shots she faced which allowed Team Red to increase their lead. Jessica Strack played the second half for Team Blue and did her best to keep her team in the game. But Team Red was just too much. Frechette recorded her second goal of the game as Carpenter and Norcross picked up the assists. Emily Field cut the deficit to three for Team Blue as she recorded her third goal of the season.