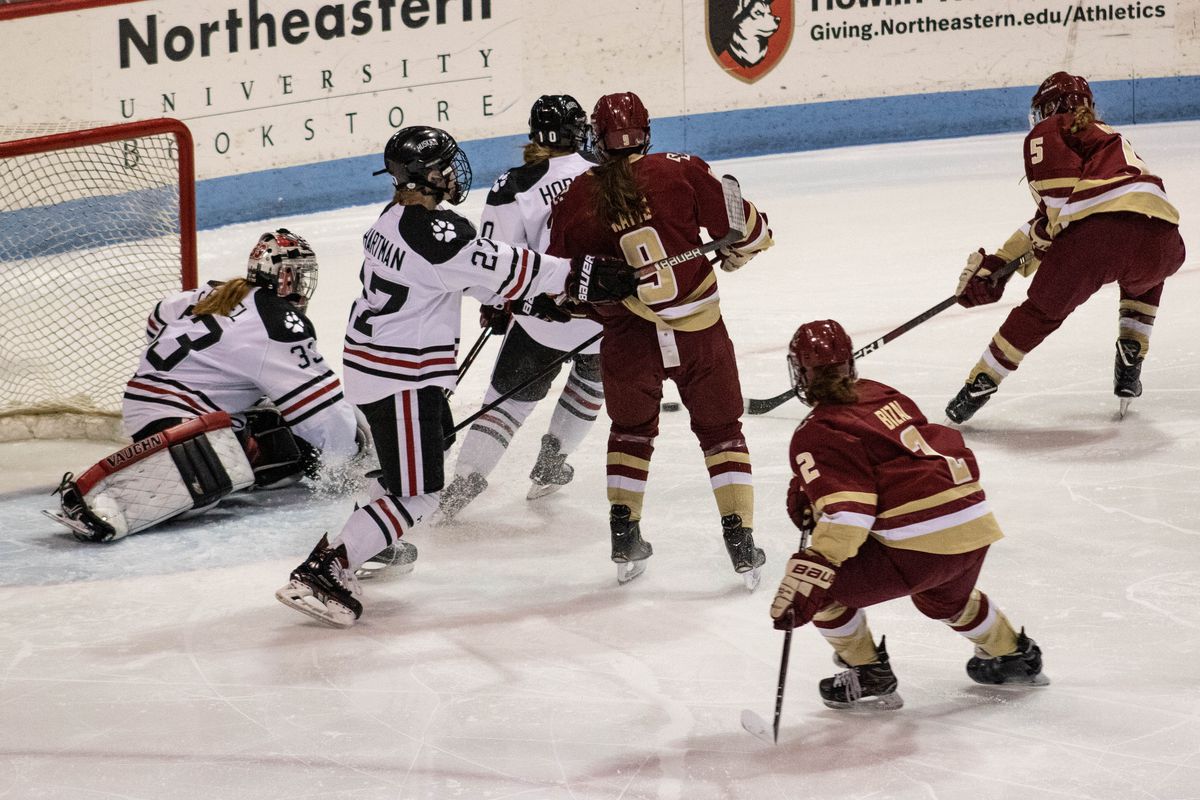 Sure, the Boston Bruins play the New Jersey Devils in Newark, New Jersey tonight. The eyes of the Boston hockey scene should be focused on the Conte Forum and Walter Brown Arena, however. Those two locations will each host games tonight that feature three of the top ten teams in the country and another who is currently receiving votes. This is going to be some amazing hockey between the Beanpot schools.

When these two teams meet, you know you are going to get an amazing product. In their last meeting, Kali Flanagan scored with five seconds to play to force overtime. It was a controversial sequence, as right before the goal Boston College coach Katie Crowley tossed a notebook trying to get the attention of the officials. The goal counted, with confusion quickly spreading around the rink and to the viewers at home as to what exactly was happening.

The Eagles defeated the Huskies 4-1 in the Beanpot Consolation game last February, as Daryl Watts scored a pair while Kelly Browne and Megan Keller each lit the lamp. The regular season was filled with thrilling matchups as well.

The best one may have come last November 27th, when the Huskies rallied for a 5-4 victory in overtime at Matthews Arena. Makenna Newkirk tied the game 3-3 at 4:38 of the third period, then broke the tie at 11:33. Both goals came on the powerplay, and appeared to put the Eagles in line for a huge two points.

The Huskies got a Chloe Aurard goal at 18:39 to force overtime, then Mia Brown scored 2:40 into the extra frame to complete the thrilling comeback.

Northeastern topped BC 4-1 in their next meeting at Matthews Arena on January 11th, while the Eagles took the series finale 7-5 the next day at the Conte.

The two teams will conclude the regular season series with a home-and-home that starts at Matthews Arena on January 10th and finishes on the 12th at the Conte Forum.

The Crimson get a good test tonight against the Terriers, who received five votes in the latest USCHO poll. The Crimson remain ranked 9th, the third ECAC team ranked. Clarkson (5th) and Princeton (8th) are also ranked.

The Terriers are looking to rebound after a hard fought 4-2 loss to the rival Eagles at Walter Brown on Friday night. They are currently 7-4-1 and just 1-2-1 at home. Their two regulation losses at home came against top ten teams, as Northeastern and BC have defeated them.

The Crimson, 5-0-0, are off to a terrific start. They are 3-0-0 away from home and coming off of 3-2 overtime victory over Quinnipiac on November 9th. They are well rested for this game.

The Terriers are 6-8-2 all-time against the Crimson. At Walter Brown they are a pedestrian 2-2-1 all-time. These sides usually meet in February for the Beanpot, but have played regular season matchups in the past. The last regular season meeting came almost three years ago to the day, as they met on November 22nd, 2016. The Terriers won that game 4-3 in overtime.

The last meeting at Walter Brown was even further back. The sides haven’t met there since February 9th, 2016.

This game features a Harvard team averaging 5.00 goals per game, good for 2nd in the nation. They’ll face Corinne Schroeder, who is 2-0-0 with a .931 save percentage against the Crimson in her career.

The last overall meeting between these two was a season ago in the Beanpot Championship Game. Sammy Davis scored the overtime winner to propel the Terriers to a 3-2 victory and Beanpot glory. Jesse Compher, who is back after battling injury, set up the game winning tally.

Unfortunately, neither of these games is on TV tonight. It feels like this is a missed opportunity, even with the Bruins playing a 7:00 pm game. There is a real appetite for women’s hockey and these two games are a great showcase of the talent at the college level.

Both games are available online, with the Terriers/Crimson on CBS Sports Digital online. As for Huskies and Eagles, that game will be available on collegesportslive.com.