Jillian Dempsey Back With The Boston Pride 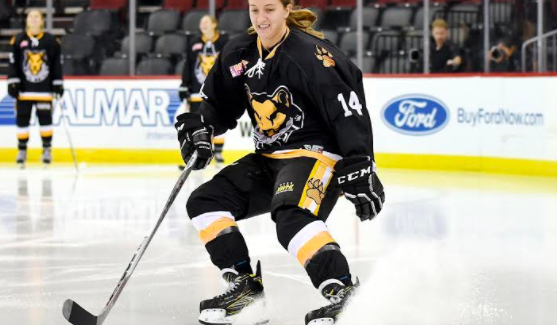 On National Teachers Day, teacher and NWHL all-time leading scorer Jillian Dempsey has re-signed with the Boston Pride for the 2020-21 season. During the 2019-20 season, Dempsey was named co-MVP of the league. While playing in the NWHL, she teaches fifth grade in her hometown of Winthrop, Mass.

A founding member of the NWHL, she is entering her sixth season in the league. Dempsey is coming off her best season in the NWHL. She recorded a league-high 40 points (17 goals and a league-leading 23 assists) while guiding the Pride to the best record in the league at 23-1. For her career, Dempsey is first all-time in goals and points. Through 91 career regular-season games, she has 98 points (46 goals and 52 assists). During the NWHL All-Star Weekend in Boston this past February, Dempsey set a new mark in the accuracy shooting competition. She hit all four targets in 9.69 seconds.

Dempsey is a proven winner wherever she plays. She won the Isobel Cup with the Pride in the league’s inaugural season of 2015-16. She also won the CWHL Clarkson Cup as a member of the Boston Blades in 2015 and was named the 2014 CWHL Rookie of the Year. In addition, she won a silver medal with Team USA at the 2012 IIHF World Championship in Vermont along with a gold medal with Team USA at the 2009 IIHF U-18 World Championship.

Before heading into the professional ranks, she played at Harvard. There, she recorded 148 points in 129 games.

Dempsey is excited to come back for her sixth season and is looking forward to seeing the league continue to grow.

Her contract is a standard one-year deal. No financial details were disclosed by the player or the league.