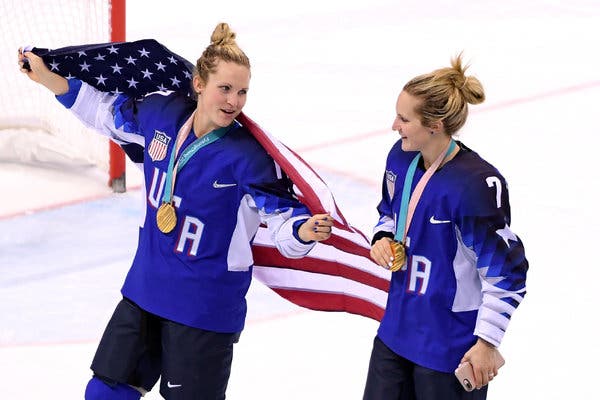 On Saturday afternoon, Team Lamoureux will battle Team Knight in the second game of the PWHPA ‘Dream Gap Tour’ stop in Hudson, New Hampshire. The team, led by Gold Medalists Monique Lamoureux-Morando and Jocelyne Lamoureux-Davidson, will bring even more star power to the weekend’s festivities.

The team will be coached by former Boston/Worcester Blades bench boss Paul Kennedy. Kennedy led the CWHL organization and is well known within the game. He’ll be joined by Alexis Miller, who played for the Blades during the 2018-19 season. Prior to that, Miller played two seasons at UNH before transferring for her final two years to Boston University.

The team captains will be US Olympians, World Champions and Gold Medalists Jocelyne Lamoureux-Davidson and Monique Lamoureux-Morando. Talk about star power for this squad! They’ll be joined by Megan Myers, who scored a pair of goals for the PWHPA in their exhibition against Boston College last month.

Another Gold Medal winner, Dani Cameranesi, will suit up for Team Lamoureux. The Plymouth, Minnesota native scored three goals in five games at the Olympics in 2018. A season ago, with the NWHL’s Buffalo Beauts, she picked up four goals and 15 points in 14 games.

Another Plymouth native and US Olympian, Kelly Pannek, will suit up for Team Lamoureux. The steady two-way forward, who played college hockey at the University of Minnesota, had 31 points in 37 games a season ago in the NCAA.