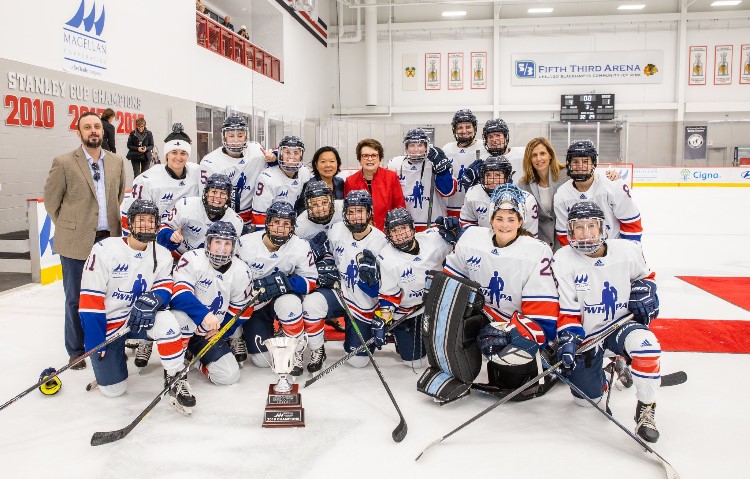 Megan Keller was named the Dunkin’ Player of the Game for Team Granato on Sunday afternoon in Chicago following a 4-1 victory in the Magellan Corporation Showcase Championship game.

Amanda Kessel started the afternoon off by notching the game’s first goal early in the opening period. It was Kessel’s first of the weekend and sent the crowd into a frenzy. Many of the fans who packed into the arena on this Sunday afternoon were there to see Kessel, with many jerseys and signs proving that.

Team Hefford would even things up early in the second when the slick skating Melodie Daoust got loose. Daoust darted off the wall and danced by a Team Granato defender, putting herself one-on-one with goaltender Katie Burt. Daoust made a nifty move in a tight space and deposited the goal 91 seconds into the middle frame.

Late in the second, Keller would make her presence known. The former Boston College Eagle anchored the Team Granato powerplay, which struck with just under four minutes left. On a five-on-three advantage, Keller loaded the gun from the top of the circle and unleashed a bomb that found its way into the goal. Keller’s tally gave Team Granato a 2-1 lead they would not lose.

A beautiful shot by Jocelyne Lamoureux-Davidson would give Team Granato the insurance marker 4:39 into the third period, while Kelly Pannek added one of her own for good measure. Team Granato’s victory makes them the second Champion on the ‘Dream Gap Tour’, joining Team Stecklein, who won the Hudson event.

In Sunday’s other contest, Team Ruggiero knocked off Team Dupuis 6-4 in the consolation game. Hayley Scamurra, who was one of the best players in Hudson, gave Team Ruggiero their first goal of the game, cutting into what was a 2-0 lead for Team Dupuis. That goal sparked Team Ruggiero’s terrific final forty minutes, as they escaped the weekend with a victory.

Like the event in Hudson, the real victory was the attention brought to the game. It was another extremely successful event that drew a strong crowd and had people engaged on social media. With the initial three stops now in the books, the PWHPA can be extremely proud of what they have accomplished. There is still work to do, this is only the beginning, but these three events could not have gone better.

Next up? A joint camp between Team USA and Team Canada, which starts November 4th. The event will run for a week and includes a pair of scrimmages. The two sides will also play a five-game rivalry series that starts in December.