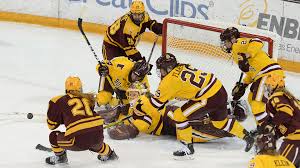 The last weekend of college hockey before Thanksgiving gave us some thrilling, tightly contested games. The ‘Battle of Minnesota’ saw the Golden Gophers battle Minnesota Duluth, while Maine did something no other Hockey East team has done in months, walking into Matthews Arena and defeating the Northeastern Huskies.

Let’s take a look back at the weekend that was in NCAA women’s hockey.

#10 Minnesota Duluth proved over the weekend that they can ride with the big dogs. The Bulldogs battled the Golden Gophers to a tie on Friday, but got the edge in the standings thanks to a three-on-three overtime goal. It’s officially a tie in the NCAA’s eyes, but for conference matters the Bulldogs collected two points while the Golden Gophers managed just one.

Maddie Rooney made 31 saves for UMD, who got goals from Anna Klein and Sydney Brodt in regulation. Jalyn Elmes, a senior defenseman, inadvertently tipped home the game winning goal for UMD in the three-on-three overtime. It was the third overtime game in the last five meetings for the two rivals.

“It was a really good hockey game here tonight,” head coach Brad Frost said per the team’s postgame release. “Two very good teams just laying it on the line — I thought both goaltenders were tremendous. Our team got better as the game went on. We had some great chances at the end of the third and in both overtimes. Unfortunately, we didn’t get that extra point, but all-in-all, a real good effort and we’ll get back at it again tomorrow.”

The Gophers did get back at it the next day. They collected a victory of their own, this one in regulation, to even the weekend set. Catie Skaja and Grace Zumwinkle scored 3:11 apart in the second period to pace the Gophers to a 4-3 victory over the Bulldogs. UMD got a goal from Ashton Bell with 56 seconds remaining, but it was too little too late.

These two rivals will meet again at Ridder Arena on January 31st (7:07pm) and February 1st (4:07pm) to conclude their season series.

The #4 Northeastern Huskies have made a habit of winning games at home. Entering the weekend they were 4-0 at Matthews Arena this season and hadn’t lost a home regular season game since February 17th.

The Huskies pushed their record to 5-0 at home this season with a hard fought 2-1 victory on Saturday afternoon. Skylar Fontaine opened the scoring 13:41 into the contest, but Celine Tedenby evened things up at 10:08 of the second period.

Huskies coach Dave Flint was honored pregame for becoming the program’s winningest coach. He did that the weekend before when he snagged win #211 as Huskies coach against UNH at Matthews Arena. He won his 300th overall game the next day in New Hampshire. One thing Flint has done so well is recruit. Last year’s star freshman Alina Mueller set up one of this season’s newcomers, Katy Knoll, for the winning goal at 10:56 of the third period.

Aerin Frankel made 20 saves in the victory, while Carly Jackson turned aside 37 shots in defeat.

The Black Bears hung with the Huskies Saturday, and gained valuable confidence in the process. That confidence was used on Sunday to accomplish something not done in over two years.

Morgan Trimper opened the scoring just 10:14 into the tilt, while Vendula Pribylova added a powerplay goal at 6:12 of the second to push Maine to a 2-0 lead. The Huskies, predictably, wouldn’t go away. Veronika Pettey and Chloe Aurard both scored in the middle frame, pushing the game to overtime.

Tedenby needed only 38 seconds in the extra period to win the game, as Maine earned their 6th victory of the campaign.

#8 Princeton sent a message to the rest of the top ten over the weekend. The Tigers are for real. #5 Clarkson was the victim on Friday as the Tigers improved to 8-2 on the season with a huge ECAC victory.

Sarah Fillier was the star in this game, scoring unassisted at 19:21 of the first period to open the scoring. She not only gave the Tigers a lead they would not lose, but also provided them with some insurance 12:05 into the second. She buried her second of the night off a feed from Carly Bullock. Mariah Keopple was credited with the other assist.

Brooke McQuigge got Clarkson within one at 5:47 of the third period, but it wasn’t enough to overcome a hungry Princeton team, who got a signature win early in the season.

The Tigers completed a perfect weekend with a 6-2 drubbing of St. Lawrence on Saturday, while Clarkson skated to a 2-2 tie with Quinnipiac.

We’ve already checked in with five of the teams at the top of the food chain in women’s hockey. What about the rest of the top ten?

#2 Wisconsin skated to a weekend sweep of St. Cloud State, collecting a 5-3 victory on Friday and then finishing the set with a 6-2 rout on Saturday. Daryl Watts paced the Badgers attack with a goal on Friday and then two more on Saturday afternoon. Sophie Shirley also had three goals, potting two on Friday and adding another in the weekend finale.

#3 Cornell had the weekend off. The Big Red will be in action tomorrow night when they visit Syracuse at 7:00 pm. They’ll then head to Columbus for a weekend set against the Buckeyes that starts Friday night at 6:00 pm.

#6 Boston College was upended 2-1 against UConn on Friday night. Hockey East’s ‘other’ Huskies are proving to be much more than that this season. The Huskies improved to 8-4-1 with the victory, getting goals from Emily Reid and Briana Colangelo.

The Eagles struck back on Saturday, however, taking a 2-1 decision of their own in Connecticut. Cayla Barnes opened the scoring at 6:10 of the hockey game, while Savannah Norcross nabbed the winner with just 1:11 remaining in the tilt.

#7 Ohio State blew out Colgate 6-2 on Friday night, but got a much stiffer test from their non-conference foe on Saturday. Ohio State trailed late, needing an Emma Maltais goal at 12:40 of the third period to force overtime. The sides skated to a 1-1 tie, with Ohio State heading home 1-0-1 on the weekend.

Lastly, #9 Harvard continued a slide by dropping a 3-1 decision to UNH at home. Anne Bloomer had the lone Crimson goal in the defeat.