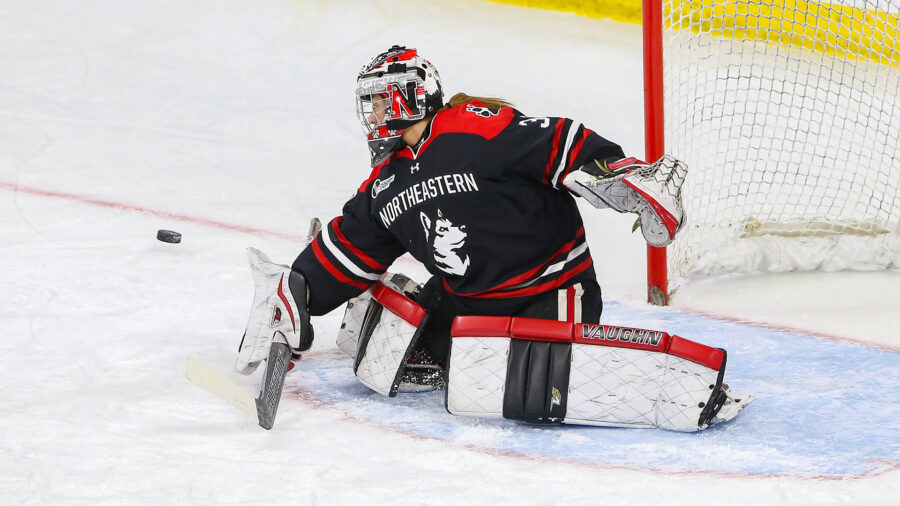 Matthews Arena has seen a lot of special moments in it’s lengthy history. The historic barn opened the new decade witnessing a stretch unparalleled in Huskies history. The women’s hockey team, one of the elite programs in the country, won five consecutive shutout victories.

That’s right, five. No one scored a goal on this team between January 5th and the 25th. 20 days, five games. To say that is impressive would be an understatement.

It wasn’t as if the Huskies were playing lesser opponents either. Northeastern shutout Boston College and UConn twice each during this stretch. BC has spent ample time as a top 10 team this season, while UConn is one of the top teams in Hockey East.

The Huskies also shutout Vermont 4-0 on January 24th before finally giving up a pair of goals to the Catamounts the next afternoon. Even then, while the shutout streak broke, the two goals against were merely a footnote. Northeastern hung ten goals in a 10-2 victory over Vermont. It was their second time this season scoring double-digit goals in a game.

The Huskies are in command of the top spot in Hockey East for the second season in a row. That took a backseat to an impressive shutout streak that captivated the women’s hockey community for a nearly three week stretch.

“I think the shutout streak is something that began with our dedication to putting our defensive efforts first before committing to play offensively,” Aerin Frankel told The Women’s Hockey Tribune. “Coach Flint constantly tells our team to take care of our own end of the ice before worrying about scoring goals. I think him reiterating this to the team is something that has begun to stick with us. “

The Huskies offense, led by Alina Mueller and Chloe Aurard, is one of the best in the nation. Head coach Dave Flint, as Frankel alluded to, preaches defense first however. That’s quite evident when looking at the stats.

Although Frankel credits her teammates and coaching staff for the success she and Philips have had this season, assistant coach Nick Carpenito believes his tandem in net also deserves a ton of credit.

“Knowing we have elite goaltending out back definitely gives the coaching staff confidence going into each game,” Carpenito said. “I believe that the goaltending does allow us to play a little bit more open because our players have additional confidence, but we don’t go into our game planning with the mindset of, “we can do this because we know our goalies will bail us out.”  We’ve always told our players that we don’t necessarily view our players on the ice as three forwards and two defensemen.

“Our message as a staff is that we want to defend with five players and create offense with five players.  Having elite goaltending certainly gives us additional confidence but as a staff, we do make sure that we emphasize that we need to take care of the defensive zone above anything else.”

Those characteristics are readily apparent when you watch the Huskies play. For example, during a 4-0 victory over UConn on January 17th, Mueller was laying out and blocking shots with two minutes to play while up by four goals. She’s the team’s top center and one of the best point producers in the country.

It’s those kind of efforts each and every night that have the Huskies where they are. Sitting on top of Hockey East and dominating most nights isn’t easy, but it is the product of a team effort that starts in net.

“The team obviously deserves so much credit for keeping the shutout streak going. When we commit to our systems and play together this is the product. The hard work that they all put in at the rink and in the weight room everyday is what makes an achievement like this possible,” Frankel said.

That hard work extends to the blue line. The Huskies have one of the deepest, most well-rounded groups in the country that combines strong defensive play with puck moving ability and exceptional breakout skills.

“Our defensemen do a great job clearing pucks out, starting breakouts and keeping their defensive assignments in check,” Carpenito proclaimed.

“Individually, players like Skylar Fontaine and Codie Cross can initiate breakouts at will, whether it be with their own feet or creating space for themselves to make that first breakout pass.  Brooke Hobson is arguably one of the best two way defenseman in college hockey, and has the ability to shut down any top line in the country.  Paige Capistran is the ultimate defensive defenseman and is incredibly dependable in the defensive zone.

“Megan Carter is a freshman with a senior IQ and excellent two way abilities, while Lauren MacInnis is developing into an outstanding two way defenseman. Gillian Foote and Brooke Tucker both add significant depth to our defensive core.”

The Huskies can roll four forward lines, seven defenders and an elite goaltender on any given night. It’s that skill that has them gunning for a second straight regular season title and third consecutive Hockey East Championship this spring.

They hope it will also be enough for the first ever NCAA Tournament win in program history.

If they are to achieve that this March, it will have to be on the strengths of their roster; defense and goaltending. It’s also going to take a lot of hard work, something Frankel and her teammates are no strangers to.

“Although we are one of the strongest teams in our league we also try to focus on outworking our opponent. When we do this in combination with all the talent we have we are very successful and it is awesome to watch, they make my life a lot easier.”

Life has appeared easy at times for the Huskies this season. It’s all a result of their talent, system and hard work. Their shutout streak was yet another reminder of how special this group of Huskies really is.