PWHPA at the 2020 ECHL All-Star Classic 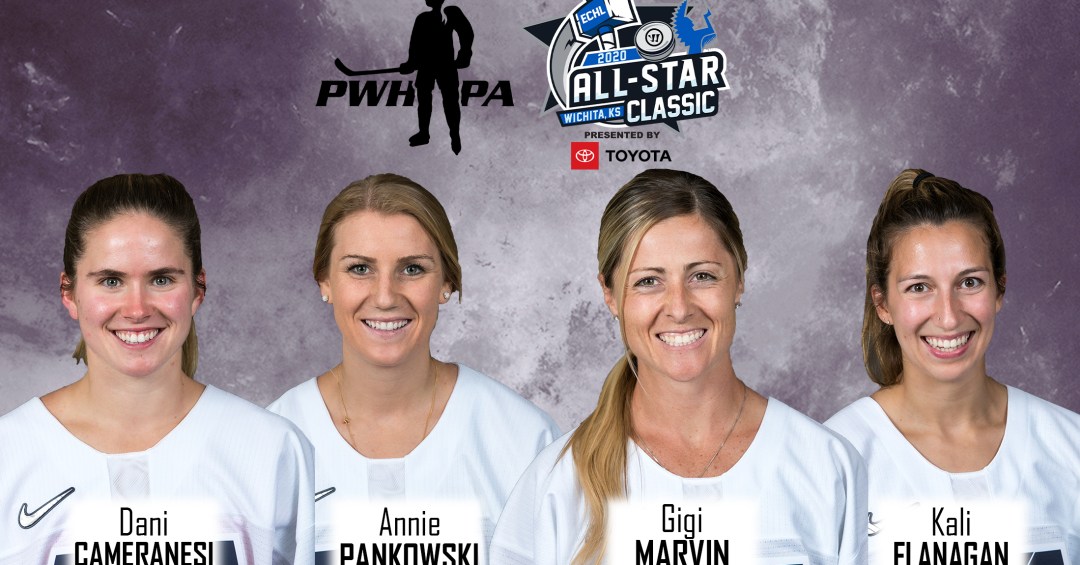 Wichita, Kansas – It would have been a big deal if the four women from the Professional Women’s Hockey Players Association fit in at the 2020 ECHL All-Star Classic. They did more than that. Gigi Marvin, Dani Cameranesi, Kali Flanagan, and Annie Pankowski proved themselves side-by-side next to the ECHL’s top talent. From warmups, where you couldn’t tell the difference between them and the men, to the final buzzer, it just felt right.

It was the first co-ed professional hockey game in an All-Star setting. Typically, when you see the women invited to the men’s events, they’ll just skate beforehand. That was not the case tonight. They wore the same jerseys as their male counterparts and looked just as good in them.

Dani Cameranesi, who was a 2x National Champion during her time as a Golden Gopher, played with Team Hammers. Her goal was one of the prettiest tic-tac-toe passing sequences of the night, there was no doubt she would finish. Cameranesi finished the Classic with a goal and as assist. She showcased her speed in the Fastest Skater competition as well, setting a time not far off from the top men. During the Skills Competition portion of the night the women did switch their jerseys temporarily to sport and market the PWHPA.

Team Hammers, along with Team Bolts were each a different collection of the host Wichita Thunder’s players. Annie Pankowski was a member of Team Bolts and she broke the ice (ca-ching!), and made some history with the first goal from a woman on the night. Her tally was the highlight reel, individual backhand flush finish you only see a pro put together. Pankowski won a Natty Chip herself, the last one won in fact with the Badgers this past March. She also ended her skate with a goal and a helper.

Most hockey fans know Gigi Marvin. The vet of the group, also a former Gopher, played tonight with the West All-Stars (best jerseys by far!). As a 3x Olympic medalist with the US Women’s National Team, she’s played in the biggest spotlights. She can add tonight to her lengthy resumé on ice. Maybe my favorite moment of the night came in her display of precision at the Accuracy Shooting contest. She ripped through the corner targets, snipping pucks clean and finishing with one of the top times of any player out there. The Warroad, Minnesota native also accumulated a goal and two assists tonight during gameplay. Her impact on the game became even more tangible after the horn sounded. There were more people lingering after the Classic to take pictures with Gigi, more than any other woman or man who participated. That’s no accident.

Kali Flanagan showed the hockey world her silky smooth mitts a couple times, setting up two ginos, each coming off a turnover she forced. The Granite Stater, who won 2 Beanpots during her time at Boston College, flashed in her race around the rink recording a time dangerously similar, but slightly ahead, to Cameranesi’s. In the Championship round she (and some guy in stripes) wrote an unexpected ending that you’d only see in The Mighty Ducks (for more reasons than one). It was her team, the East All-Stars, vs. Gigi’s West All-Stars in the final round. This time, without Emilio Estavez on the bench, (and the hockey ref gods on her side) she scored the game-winning-goal to send the East All Stars to their 2nd straight ECHL All-Star Classic Championship.

Seamless flow, nothing fake or forced, genuine competitiveness, one of the prettiest goals and sharpest shooters, and a night cap championship game winning goal seems like a good start for the women playing alongside men, But it’s just that: a start. Lets all hope there’s a lot more where that came from. Now I just got to get this whole “rally scoring” thing down.