For the most part, Canadian members of the PWHPA will be playing for one of the three Canadian hubs in 2020-21. The same goes for the American players and the two Regional Training Hubs based out of the United States. Cassidy Vinkle, an Ontario native playing in New Hampshire, is one of the rare Canadians playing this season in the United States.

At the conclussion of her college career, Vinkle elected to go pro and joined the PWHPA for the organization’s first season in 2019-20. While training out of New England, Vinkle served as an assistant coach at the Division 3 level of the NCAA with New England College. This year, Vinkle made the New Hampshire Regional Training Hub roster and will suit up for head coach Bill Flanagan.

Recently, we caught up with Vinkle to discuss why she joined the PWHPA after college, her goals for the upcoming season and more!

CV: Both my parents played a high level of hockey and my older sister played, so it was just a normalcy that I would start playing when I was a young girl. The passion that led me on my career was simply fueled by the love of the game and the feeling of winning. I loved everything about being on the ice for practices and games. The hockey lifestyle and community is honestly one like no other.

CV: I was drawn to the PWHPA because I knew it was time for something better for elite women hockey players. After being treated like a professional at the university level, that treatment should continue once you are graduated. The goals and values of the PWHPA that stood out to me were to not be satisfied with anything less than professional. I like how they celebrate their victories like sponsorships, partners, and successful showcases, but they still know there is lots of work to do.

CV: This is my second year in the PWHPA and so far my experience has been great. It’s a really fun and inspiring group of women who make me proud to be apart of the PWHPA. I am thankful for the sponsors, like Adidas and Secret, who have really stepped up and supported women’s hockey. I think their commitment to growing the game is a great example for other enterprises.

CV: My favorite hockey memory is definitely winning my first National Championship with Clarkson University in 2017. It was a very exciting game against Wisconsin that we won 3-0. 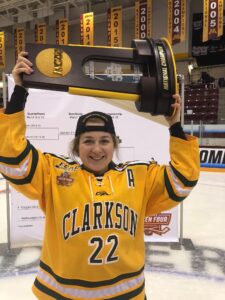 CV: Personally, my goals for this season are to continue to get faster and stronger and to contribute to our team success. My goal for the region is to bring all of our talent, skill and work ethic together to mold into a winning team at the upcoming showcases!