Forward Chelsey Goldberg is in the midst of her second season as a member of the PWHPA. A star forward from Agoura Hills, California, Goldberg has found her second home on the east coast. The former Northeastern University star is a member of the New Hampshire Regional Training Hub for the 2020-21 season.

Goldberg came to New England for her junior hockey, playing for NAHA White in both 2009-10 and 2010-11. She scored 21 points (6 g, 15 a) in 25 JWHL games in her final junior season before heading into the city of Boston. There, she joined an up-and-coming Northeastern program for the 2011-12 season. Over the course of four seasons, Goldberg helped turn the Huskies from afterthought to contender in Hockey East. Now, Northeastern is the top of the class in the country’s elite conference.

Following her graduation in 2015, Goldberg turned pro. She remained in Boston, joining the CWHL’s Boston Blades for the 2016-17 season. Goldberg played two seasons for Boston before the organization moved to nearby Worcester for the 2018-19 campaign. She’d follow the Blades to Central Massachusetts, but everything would change after that 2018-19 season.

The CWHL folded, and Goldberg was temporarily left without a playing home. She joined the upstart PWHPA in 2019-20, training out of New England. This season, she is part of the first New Hampshire Regional Training Hub roster. The Women’s Hockey Tribune recently caught up with Goldberg to get her thoughts on the PWHPA, the season ahead and much more! 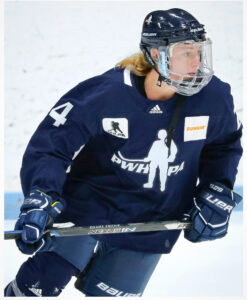 CG: As a young girl growing up in Southern California, I played the typical California sports- soccer, lacrosse, and swimming. I did not know much about hockey until some close friends decided to buy roller blades and start playing roller hockey. It was then that my twin brother and I decided to join them on this new sport. Little did we know we would be playing roller hockey outside in 100+ degree weather, which ended up leading us inside to play ice hockey. From there, we were just playing in-house leagues for fun, but our coaches encouraged us to take our skills to the next level and consider looking into the college route.

I ended up playing boys hockey with my twin brother, until eventually I switched over to the girls side to start really pursuing the college scholarships and what it would take to get to that next level. Fast forward a few years, and my twin and I both ended up in Boston playing college hockey. I am so grateful to be able to continue my hockey career and play at this level for the PWHPA.

CG: After I graduated from Northeastern University, I ended up signing a professional contract in the Canadian Women’s Hockey League for the Boston Blades. After a few years in the league, the announcement of the league discontinuing operations took us all by surprise. As soon as about 200+ players decided to come together to join forces and create the PWHPA, I knew that I needed to continue to be a part of this.

Of course we all want to play the game that we love, but overall we are fighting for the bigger picture of women’s hockey, the equality that we deserve, and the foundation of a sustainable professional women’s league, where younger players and generations can dream about playing professional women’s hockey one day and not have to worry about managing a full-time job on the side as well. This is important to me and hence why I stand by the mission of the PWHPA. It’s not necessarily about us individually, its bigger than us, and we are all fighting for the same thing.

CG: The PWHPA has been incredible. It’s such an amazing association to be apart of, knowing that we are all here for the same reason. To also see the support that we have gotten and continue to receive is amazing as well. Not only do we continue to compete with and against the top talent in the world, but to see our partnerships and sponsors continue to develop and support our mission is incredible.

The 2019 ‘Dream Gap Tour’ was a very special event to be a part of and I am looking forward to seeing what the PWHPA continues to achieve and has in store for the players, coaches, fans, PWHPA members, volunteers, staff members, sponsors, and everyone else involved that is making this fight possible. I had a very unique hockey career up until this point, and the PWHPA allows me to continue living out the dream of playing professional hockey, while also fighting for a bigger cause.

Long story short, I broke both of my legs playing hockey, and was out for four consecutive years. My college hockey experience was very different than most players, I can imagine, so to be able to continue to play feels like I am making up for the years that I was out of competition due to the adversity that I encountered along the way. It’s a cool experience to be a part of.

CG: I would say my favorite memory would be winning the Beanpot Championship in back-to-back years at Northeastern. For those that don’t know, the Beanpot Tournament is an annual tournament played in Boston consisting of Boston College, Boston University, Harvard, and Northeastern University. It is essentially for “bragging rights” and to be the “best” team in Boston. It’s played during the first two weeks of February.

It’s a fun time of year, very competitive games against our rivals, so winning it back-to-back was very fun and exciting!

Another very special memory comes from the PWHPA. At the Secret Showcase in Toronto during the Dream Gap Tour last year, I was able to meet a young female player who had broken one of her legs, that had reached out for some words of encouragement and advice. Before the showcase took place, I had been in touch with her, via social media, and I was able to share my story of breaking both legs, how I overcame this adversity, and what I learned along the way. We developed a unique bond, so being able to meet her and her mom in-person really confirmed that what the PWHPA is doing is all worth it and is making a positive impact.

CG: My goals overall would be to continue to make positive strides and a difference for women’s hockey. Personally, I just got wrist surgery a few months ago, so my goal is to continue to strengthen that and get back to full strength. For the region, we just need to keep doing what we are doing to stay safe and healthy so that we will be able to continue to play the sport that we love and are fighting for!