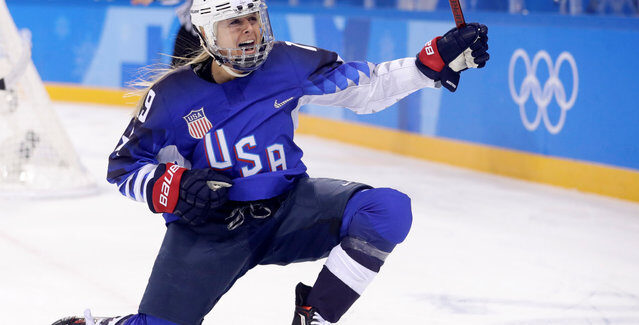 Gigi Marvin has done it all in the sport of hockey. A native of the hockey hotbed that is Warroad, Minnesota, Marvin has won both professional championships and international accolades. This season, Marvin has taken her talents to the State of New Hampshire. She’s suiting up for the New Hampshire Regional Training Hub in the second season of the PWHPA’s existence.

A 2018 Gold Medalist with Team USA, Marvin has played in three Olympic Games. In addition to her Gold Medal triumph, Marvin helped Team USA take home the Silver in both 2010 and 2014. She’s also appeared in seven World Championships, winning Gold in five of them and Silver in two others.

If that wasn’t enough, the former University of Minnesota star has NWHL, CWHL and WWHL championships to her name. She won the NWHL’s Isobel Cup in 2016 with the Boston Pride, the CWHL’s Clarkson Cup in 2013 with the Boston Blades, and a WWHL title in 2o11 with the Minnesota Whitecaps.

Marvin elected to join the upstart PWHPA in 2019-20, leaving the Pride of the NWHL. She trained out of New England a season ago, and this year suits up for the lone training hub in the New England area. She’s already carved out a key role on coach Bill Flanagan’s team.

The Women’s Hockey Tribune recently caught up with Marvin to discuss why she made the jump to the PWHPA, what got her into hockey and much more!

GM: I grew up in a hockey family in Hockeytown, USA, so naturally the skates were going on no matter what.  Everything about the sport, the skating, stickhandling, scoring, all of it I loved from an early age and that love fueled the passion.

GM: The common goal we have of creating a viable and sustainable professional league for women is what drew me to the PWHPA.

GM: I’ve enjoyed my experience with the PWHPA and am grateful for the many people working on our behalf to create a sustainable league.  It’s incredible the sacrifices people are making in order to pursue this realistic goal.  The talent in the women’s game is off the charts and it’s a blast playing with these players.

GM: My favorite hockey memory is winning the gold medal in the 2018 Olympic Games in South Korea! 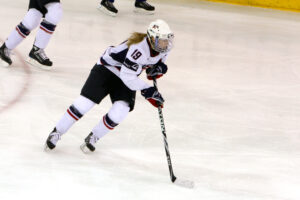 GM: I’m looking forward to competing with the New Hampshire region this season! I think the biggest goal we have is winning our games, and eventually the ‘Secret Dream Gap Tour’.