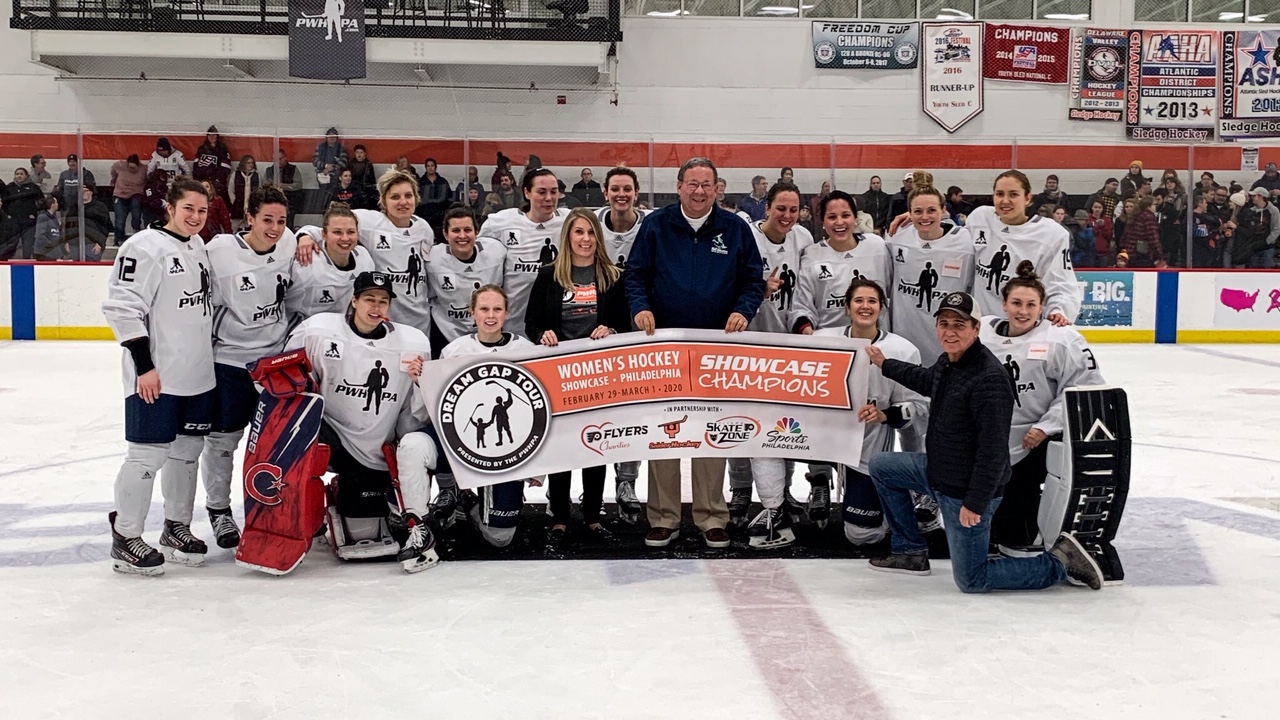 What a thrilling and exciting way to end a great weekend. Day Two of the Dream Gap Tour in Philadelphia concluded with a walk-off win by Team Turnbull.

In a thrilling championship game that went to overtime, it was Team Turnbull rallying from a 3-1 deficit to win by a final score of 4-3 over Team Keller. Bridgette Lacquette scored the game-winning goal 57 seconds into overtime.

As Lacquette said postgame, “Honestly, as I got that puck, I just wanted to get it off my stick as fast as I could. It was a flutter shot, but still went.”

While Lacquette will get praise for scoring the deciding goal, the story of the game for Team Turnbull was their goaltender Kassidy Sauve. Sauve earned the first star of the game as she stopped 39 of 41 shots. She made several crucial saves with her team trailing 3-1 in the second period. Who knew a goalie could move like that. Her teammates could not stop giving her praise postgame.

“Oh man, she really stood on her head, Lacquette said post-game. “She made a lot of saves I was like ok that one is going to go in and it hit her right on the mask or she would kick her pad out. She played unbelievable.”

“She obviously stood on her head and made some big saves and definitely kept us in the game,” Gabel added post-game.

The intensity was ramped up just a bit in this game as it had been all weekend long. While neither team taking home any hardware of sorts, pride was on the line along with bragging rights. The Lamoureux Twins said it best post-game, “No one wants to go home a loser,” Monique said, “But we are losers,” Jocelyn added. “Yeah, but nobody wants to be.”

Team Keller came out strong of the blocks strong as the top line of Dani Cameranesi-Amanda Kessel-Hannah Brandt picked up where they left off on Saturday night. Cameranesi scored the opening goal from Kessel and Brandt. It appeared the rout was on as Team Turnbull was trying to keep up with the pace of play.

However, Team Turnbull took advantage of the opportunities given to them by Team Keller. Loren Gabel scored the first of two goals on the evening on a pass from Lacquette. After one period of play, the game was tied at 1-1, but it would not remain tied for long.

With Team Keller on the powerplay, Cameranesi scored her fourth goal of the weekend and second of the game to give her team the lead. Kessel and Brandt picked up assists on the goal. It appeared Team Turnbull had tied the game at 2-2, but the goal was called back on goaltender interference. With Team Keller on a 5-on-3 power play, Monique Lamoureux-Monrando scored to give her team a 3-1 lead after two periods of play.

Who knew at the time that would be the last goal that high powered offence would score. Things got interesting as the third period began. About four minutes into the period Gabel got her second goal of the evening to cut the Team Keller lead to 3-2. Then with about nine minutes left in the game, captain Blayre Turnbull tied the game at 3-3. Laura Stacey and Rougeau picked up the assists.

At this point in the game, Sauve had stopped 30 shots while Team Keller goalie Nicole Henley had stopped 20 shots. Both goalies were playing great. There was a flurry of chances by each team to end the third period. Fans were being treated to a great hockey game by both teams.

As the overtime started Team Burndull was controlling the puck in the offensive zone. After a turnover in the neutral, it led to an odd-man rush the other way where Jamie Lee Rattray and Melodie Daoust set up Lacquette’s game-winning walk-off goal. Right after the celebrated in the corner, Turnbull immediately skated off the ice to catch her flight back home.

This game capped off what was an amazing weekend in the Philadelphia area. The crowd saluted both teams and were treated to another great day of hockey action. In the first game of the day, Team Decker defeated Team Nurse by a score of 3-2. As Kelly Panek, Kelsey Koelzer, and Alyssa Gagliardi scored goals for Team Decker. Natalie Spooner and Jessie Eldridge scored for Team Nurse.