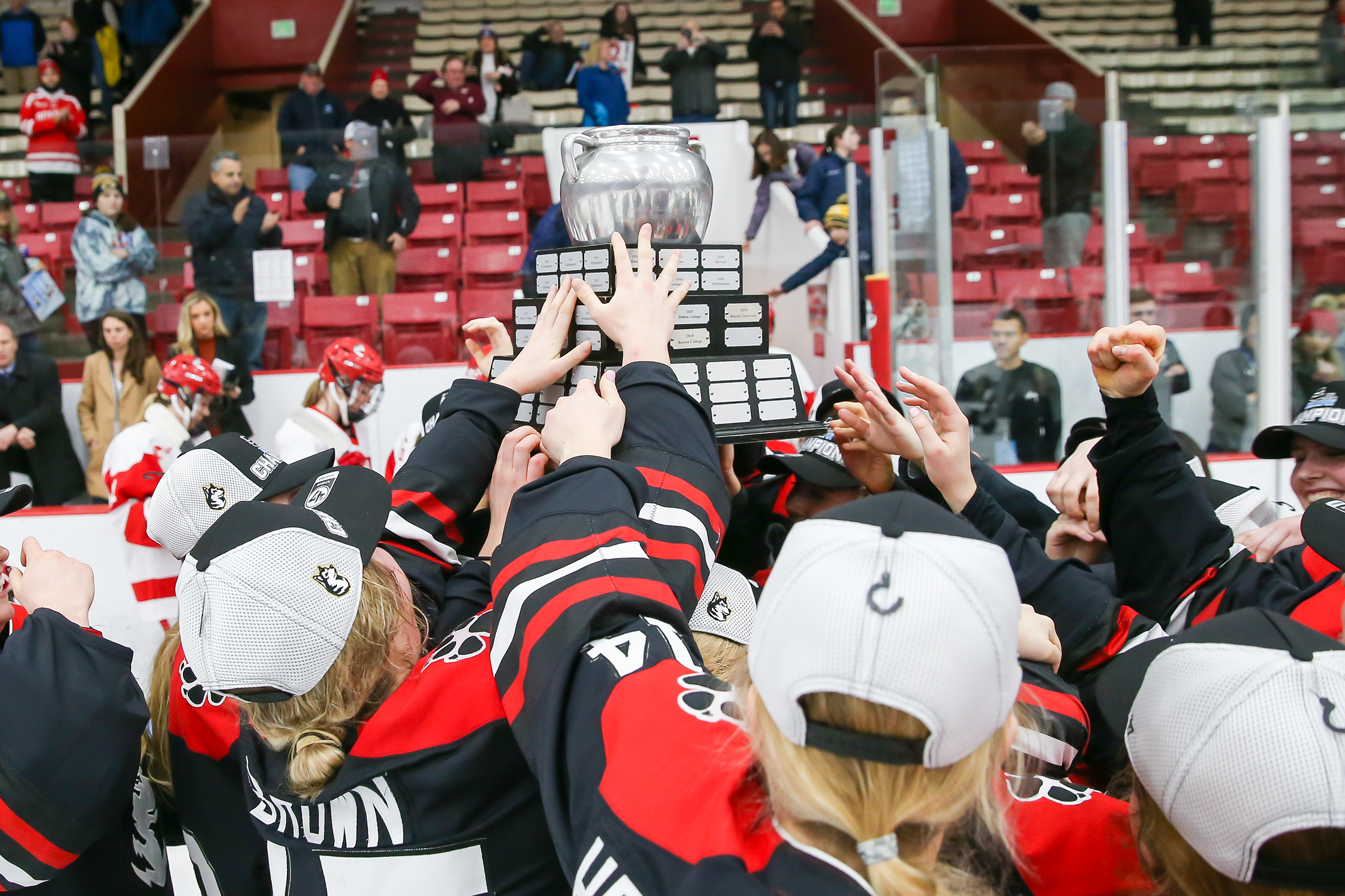 It wasn’t a routine night at Walter Brown Arena, last Tuesday evening was special. The second Tuesday in February on Commonwealth Avenue was no more, and no less special than the second Monday in February on Causeway St. It was only the fifth time in the forty-two year history of the Women’s Beanpot, that Boston University was the host. The host Terriers had a shot to defend their title in the house that Bach, Poulin, and LeFort built. For the first time in thirty-eight years, the Terriers were defending the crown as the best college hockey team in the Hub.

Whichever Final matchup that came to fruition was going to be a good one. Harvard Head Coach Katey Stone told me: “you’re playing a nationally contending team each Tuesday no matter who the matchup is.” She wasn’t wrong. Once more In 2020, the field was deep like Crater Lake. For the sixth time in the last decade there were at least three ranked teams amongst the field. But, all the stars seemed to align when the host Terriers would be pitted against the vaunted Northeastern Huskies.

There were murmurs at the teams’ prior meeting, on January 28th at Matthews Arena, this was the Beanpot Final matchup most expected. These two had clearly established themselves as the top two teams in Hockey East. Hockey East, by nature of the location of the schools within it, is headquartered in Metro Boston. These teams play each other at least three times a year. So organically, the familiarity between the programs, in tandem with their standings in the conference this year, created an enhanced anticipation for Boston University to meet Northeastern University in the Final. After BU shutout archival BC in their semifinal, and NU topped Harvard in theirs, it became inevitable. The club who one year ago, snapped the longest running drought in Beanpot history, was set to match up with the club riding the new longest active skid.

Northeastern hadn’t won the Beanpot in seven years. 2013 was the last time they held bragging rights over their crosstown foes. They were a team coming off back-to-back Hockey East Championships, ranked in the top three all season long. They had already claimed the Hockey East Regular Season Championship before Januarys conclusion. But after two disappointing, back-to-back fourth-place finishes, the Huskies felt as if it was their year. They knew the Terriers wouldn’t give up the trophy easily. It continues to serve as a reminder of a seasons success for 365 days.

On Championship night, there was a tangible aura on Babcock St. The media faction overflowed the press box and seeped to the ledges outside of it, overlooking the legendary ice surface. Publications not typically in attendance, ones that are important to the great city of Boston consumed the seats above ice level. The vibe that permeated campus over the last week latched onto Walter Brown with as tight a grip as ever before. BU Head Coach Brian Durocher, when talking about the student body as well as other respective BU athletic programs, said, “they might miss a Friday night versus UConn, but everybody knows about the Beanpot.”

BU had home-ice advantage, and the added benefit of “a few extra people there, we’re familiar with the nuances of the building, get to be in our own locker room,” Durocher said. Give the Doghouse credit though, the Northeastern contingent showed up and played a factor. But, it was the Dogpound who got first laugh when Kristina Schuler tucked a backhander inside the post on a breakaway shorthanded to give the Terriers the early lead. A back-and-forth, physical first period ended tied 1-1 after Chloe Aurard, on a 2-on-1, slung one through Corinne Schroeder with inside 3 mins to go.

Aurard (the 2020 Beanpot MVP) scored her second straight off a giveaway in the BU zone to give Northeastern its first lead. Subsequently, Schroder made her first of two Olympic-level saves on Alina Mueller, the top scorer in Hockey East, just before the 9 min mark in the second period. The left pad stop came on a shorthanded, all alone breakaway bid. That kept the door open for a signature Abby Cook drive, from the point on the power play, to tie the game at 2, where it remained after 40 minutes.

The power play would play a factor again in Northeastern retaking the lead with about 5 minutes to play in regulation on a Jess Schryver tally. Schroeder, yet again made a planet play on a save against the most talented player on the ice that night in Mueller, once more on a breakaway to keep her team within one. Without the play of Corinne, BU wouldn’t have been in position to edit Northeastern’s script. With the game still at a one-goal edge, Boston University would find another equalizer about 5 minutes later. The old tin roof at Wally B, which was first constructed in 1971, exploded when Sammy Davis tied the hockey game with 22.8 seconds to go. That tin roof acted as a conduit all night for the loudest home building amongst the four Women’s Beanpot foes. After the 1st period ended with a 1-1 score, the 2nd at 2-2, the Beanpot Finals was heading to overtime tied at 3 a piece. Neither outfit was able to put home a game-winner in the first OT, which encompassed the traditional 5 minutes per NCAA rules. At that point, the game officially ended in a tie, as far as Pairwise implications were concerned. Don’t be fooled though, no one seated on either side at Walter Brown Arena was buying that.

In the second overtime period each side traded opportunities. Both teams had early chances to send their rambunctious sects into chaos. Boston University had the first power play of double OT but couldn’t capitalize to repeat as champions. The Huskies, like so many times over the last few seasons, came up clutch in the biggest moment. At 16:03 of the 2nd OT period, Lauren MacInnis wristed home a rebound to send everyone wearing Red and Black into pandemonium. Hockey paraphernalia rained down onto the frozen surface as players cascaded onto the ice. The Huskies mobbed their goaltender Aerin Frankel (the Bertagna Award winner), embracing sweet victory for the first time since 2013. Northeastern had won their 17th Beanpot Championship and had snapped the longest active drought.

The 2020 Women’s Beanpot Final was an all-time game, between the two best teams in New England. It showcased some of the best talent in the world. The 1790 people who attended set a new Women’s Beanpot record. The atmosphere was palpable the whole night. The super bands drowned each other out, as the Doghouse and the Dogpound taunted the opposition in synchronized fashion. This game exhibited itself as one of the best ambassadors for women’s hockey in recent memory. This stuff deserves the attention it’s starting to get.

So often in sports; the media, the fans, and even the athletes use baroque hyperbole. The overwhelming majority of the time, the hype far exceeds the actualities of the contest. This game was the minority. It outdid its own expectations. The biggest player in that is that it was such a good game. More indirectly, there was more than just two great teams battling for a single trophy. There were two other historic women’s hockey programs who pushed these ones the previous week. The better each program gets across town, the more it pushes the next to match. Next year, each of the four teams has a realistic shot at claiming the ‘Pot as their own in 2021.

The depth within and between these four women’s collegiate hockey programs continues to saturate. You can extrapolate this group of elite Boston hockey programs out to the rest of the country as the talent pool continues to grow. The more exposure to the product, the better the product becomes, like a habit-cycle. As the talent pool builds, the game improves, and the fans pay attention. This years Women’s Beanpot is clear evidence that women’s hockey continues to prove itself as a viable product.