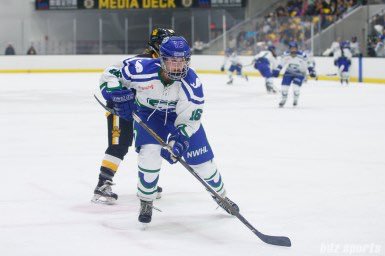 Six more players inked contracts in the NWHL earlier this week, bringing the total to 80 players now under contract as the league gets set to start its 5th season. The Connecticut Whale signed three players, while the Metropolitan Riveters added a netminder and the Minnesota Whitecaps inked two.

The Whale will return Hanna Beattie, who is entering her third season with the club. Beattie has played both forward and defender during her 30 games of professional experience, adding much needed versatility to the roster. She becomes the ninth member of the 2018-19 Whale to re-sign with the club.

Connecticut also inked former Holy Cross defender Erin Hall and D-3 standout Brooke Wolejko. Hall joins the Whale after two seasons in the CWHL with the Boston/Worcester Blades. She was the 39th overall pick of the club in 2017 and has played in 17 professional games. Wolejko, who played at St. Lawrence and then D-3 Plattsburgh State, led D-3 with a .962 save percentage in 2017-18.

The Whitecaps re-signed Kalli Funk for her third season with the club. The veteran won the Isobel Cup with Minnesota a season ago. She’ll be joined by Kelsey Cline, who played four seasons at the University of Minnesota and played both forward and defense. The versatile Cline hopes to bring depth to a strong Minnesota blueline. She’s the seventh former Golden Gopher to join the team.

Lastly, the Metro Riveters agreed to terms with Dana DeMartino. DeMartino, a Long Island native who impressed at a tryout, played her college hockey at Manhattanville and Farmingdale State. She crafted a .970 save percentage for the Farmingdale State men’s team in 2016-17.

The NWHL made a massive signing of its own on Thursday, agreeing to terms with Twitch on an exclusive three-year stream rights deal.