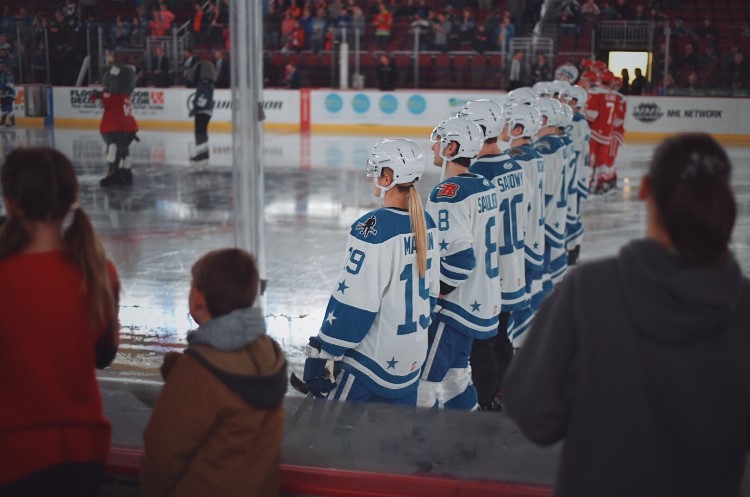 It was a successful night in Wichita, Kansas as the ECHL held its annual All-Star Game. This year there was a little wrinkle as four members of the Professional Women’s Hockey Players’ Association participated in the event. They fit in perfectly and showed they can run with the men any day of the week. Granted, these were exhibition games. That said, Gigi Marvin, Dani Cameranesi, Kali Flanagan, and Annie Pankowski proved their worth skating alongside the ECHL’s top talent.

Throughout the tournament, the ladies displayed their skill on the ice showing those fans who have not paid attention to women’s hockey that they are just as amazing athletes as their male counterparts. By the end of the event, each PWHPA player had registered several points and each went home with a goal to their name. During the Championship Game, between the East All-Stars (Flanagan’s team) and the West All-Stars (Marvin’s team), the Hockey Gods were on the side East.

As the video shows, one of the players on the East tried to make a pass to Flanagan to send her on a breakaway. The puck went a little further than he would have liked. As the puck went into the West All-Stars’ zone, one of the referees kicked the puck to Flanagan as she potted it into the empty net to give the East a 4-1 lead. Unbeknownst to her, this goal would become the eventual game-winning goal as the East defeated the West 4-3.

However, instead of praising the women for their efforts in the game as a whole, there are some out there that just want to make it about what the ref did and not how the women competed with the men on a high level.

As you can see, this person is trying to make a controversy where there isn’t one. They are trying to take the spotlight off those in the event and make it about one thing. The referee knew he made a mistake as he laughed with the players at the end of the game, but the point of the event was how women’s hockey is progressing as they continue to ‘Grow the Game’. All four members of the PWHPA put on a show for fans to see in Wichita and around the country on NHL Network.

These ladies are trying to get on equal footing as the men. Comments like “there was no contact” and “it was shinny at best” are reasons why women’s hockey can’t grow at a rapid pace. That is because people like this are looking at the event with a narrow mind instead of analyzing the event as a whole.

One thing is for sure. These ladies can compete are the same level as the men. The 2020 ECHL All-Star Game was a success and shined the light on women’s hockey as they continue to make strides towards their male counterparts.

The light will continue to be on women’s hockey this weekend at the 2020 NHL All-Star Game in St. Louis. Soon after, at the end of February, the PWHPA will hold their next Dream Gap Tour Event in Philadelphia.