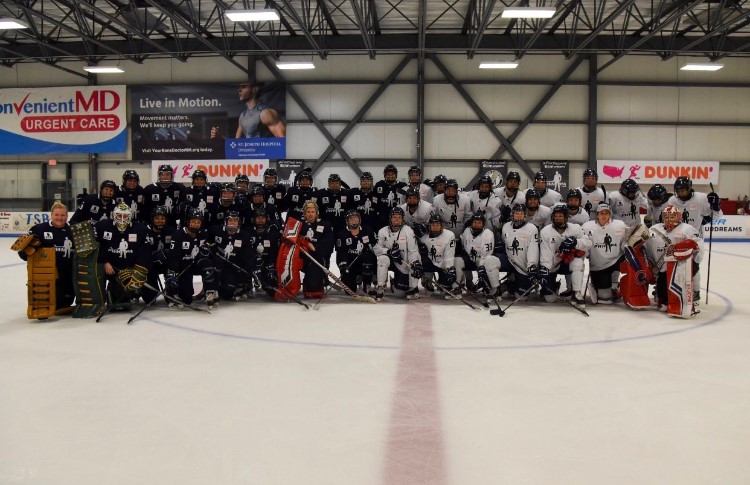 The thing about this past weekend’s Dream Gap Tour stop in Hudson was that every player on the ice was supremely talented. These are the best of the best when it comes to women’s hockey, and they lived up to the billing over the weekend at Cyclones Arena.

As we continue to recap the weekend’s event, this morning we take a look at some of the best performances from the weekend!

The fastest skater on the ice, without doubt, was Kendall Coyne Schofield. That’s not a surprise, is it? Coyne Schofield participated in the 2019 NHL All-Star skills competition and finished ahead of some of the fastest skaters in the world. Her wheels were on display this weekend. The thing that really catches my eye with Coyne Schofield is that her hands are able to keep up with her feet. That makes her even more dangerous. She was all over the ice all weekend long, and led the way with four goals.

Kali Flanagan gets the nod for the fastest defender of the weekend. I really liked her game, mainly her ability to transition the puck from defense to offense. She possesses a crisp first pass, but also can carry the puck up ice and is a real threat in the offensive zone. There were a number of occasions where she collected the puck in her own zone and darted past opposing forwards to create offense. Few other defenders can match her speed.

Alex Cavallini turned in one of the better goaltending performances anywhere in the world on Saturday afternoon. Team Knight dominated possession against Team Lamoureux in the second semifinal, but Cavallini made over 40 saves to give her team a puncher’s chance in the 3-1 defeat. Without her, that game gets out of hand quickly. Cavallini not only made a high number of saves, but many of her stops where on high danger opportunities. She was locked in.

The thing about Cavallini’s game that impressed me the most was her ability to track the puck. She was always calm in her goal and trusted her instincts. She didn’t overthink anything and as a result was always seemingly in the right spot. She’s a fundamentally sound netminder.

Kassidy Sauve was equally impressive. Sauve calmed things down for Team Stecklein and held both Team Flanagan and Team Knight at bay. You don’t win a weekend showcase like this without great goaltending, and Team Stecklein got it from Sauve. Her athletic ability is through the roof and, like Cavallini, she is exceptional at tracking the puck. Sauve gave up very few rebounds, forcing opponents to score off their first shot.

Hilary Knight proved, once again, why she is one of the best players in the world. Although she was relatively quiet on the scoreboard, she had a major impact in both of Team Knight’s games. Knight consistently bullied her way into the offensive zone with possession, setting up numerous opportunities for her team. She was also a nightmare around the net, creating second chance opportunities and providing screens. I thought she set the tone on Saturday, proving to Team Lamoureux that Team Knight could not be pushed around.

Hayley Scamurra was a very good forward at Northeastern University. It looks like she has gotten even better. The scary thing with her? She plays a power forward game, but has terrific speed and dangerous hands. Her backhand goal in tight against Team Flanagan was arguably the goal of the weekend on Saturday. She was the best player on the ice in that game, and really made a name for herself in the women’s hockey world.

Scamurra can score, but her vision is really what separates her from the pack. Her ability to drive into the offensive zone and set up teammates was on full display this weekend. She was arguably the top playmaker in this event.

This is a tough thing to hand out because everyone gave it their all on the ice this weekend. The competitiveness was through the roof and all four teams didn’t back down. I was particularly impressed by the work of Alyssa Gagliardi and Laura Stacey. Both defenders played a steady, shutdown game all weekend long and made the simple plays in both of their games.

Stacey’s ability to jump up into the play was noticeable to me, while Gagliardi was nearly unbeatable in her own zone. Being a shutdown defender is hard work that doesn’t get the love it deserves. These two played the role exceptionally this past weekend and both flashed plenty of skill to go with it.

Megan Keller’s bomb to tie things up on the powerplay in the consolation game on Sunday was a thing of beauty. She flashed the skills that made her a star in the NCAA at Boston College and a US Olympian. Keller’s shot is lethal, and was the hardest one we saw this weekend.

Watching Marie-Philip Poulin go to work is special. Her ability to weave through defenses and find scoring lanes is incredible. Her line had the puck on a string against Team Lamoureux on Saturday afternoon, and she was the one pushing the river for the trio. She might not be the fastest straight line skater, but she has an elusiveness to her game to makes her nearly impossible to defend. She was exciting to watch all weekend long, and made skill plays that had the crowd reacting in both of her games.

Kelly Pannek, who won Gold in 2018, really caught my eye as well. She’s just extremely good with the puck in tight spaces, and has the ability to make plays that few others can. On numerous occasions this weekend she gained the blueline with possession and made a defender miss to set up offensive looks. She plays a subtle game, but a game that has a lot of finesse to it. She was enjoyable to watch in Hudson.

Who was the MVP this weekend? It was every single player that laced up the skates at Cyclones Arena. Seriously. Jayna Hefford, who joined me in the first intermission of game one, told me that rivalries were being put aside for the better of the game and that this tour was more important than anything else.

These players took a chance forming the PWHPA. They took a chance starting the Dream Gap Tour. To this point, it has been a success. The show that these terrific athletes put on this weekend was extremely enjoyable and sent a powerful message to young girls everywhere that they too can dream about being professional hockey players.

For that, every single one of the women on that ice deserves an MVP nod.