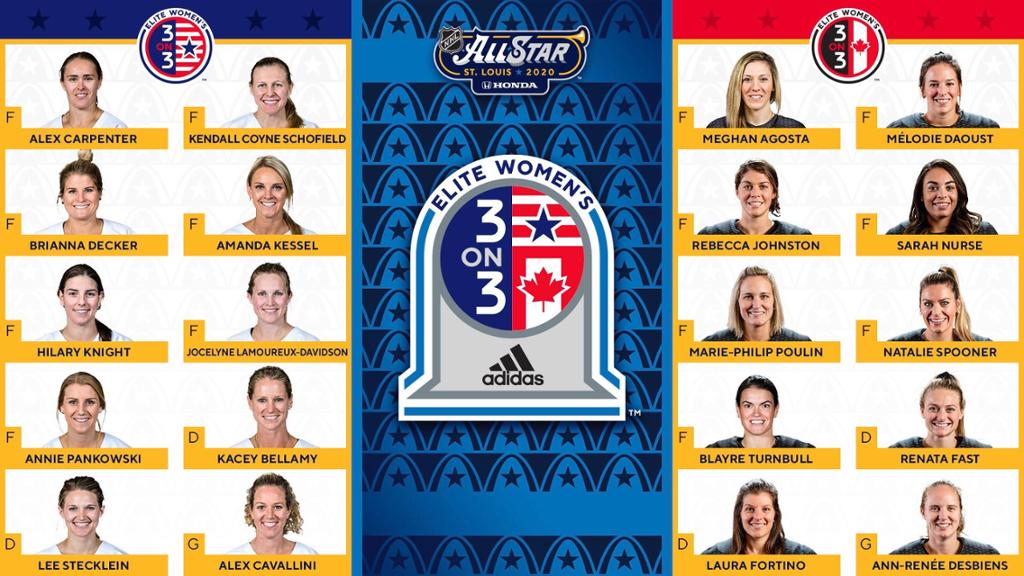 Tonight, the NHL will kick off the on-ice portion of their annual All-Star weekend in St. Louis. The NHL All-Star Skills Challenge will be live on NBCSN in the Untied States and Sportsnet/CBC in Canada. The annual competition will have a different twist this season, as an elite women’s three-on-three game takes the spotlight.

The ‘Elite Women’s 3-on-3 presented by Adidas‘ will feature the American All-Stars and the Canadian All-Stars. Each team will feature nine skaters and one goalie on their roster. The sides will play two ten-minute periods with a running clock and there will be no powerplays. Instead, each penalty will be “served” with a penalty shot being awarded to the player that draws the penalty.

Alex Rigsby Cavallini will serve as the goaltender for the Americans.

In addition to the 3-on-3 game, one All-Star from the Canadian team and another from the American team will participate in the first ever NHL Shooting Stars event. In total, ten players (eight NHL), will be positioned on an elevated platform behind the goal, approximately 30 feet above the ice surface. From there, the participants will shoot pucks at a variety of targets located on the ice. Each target will have a different number of points assigned to it, according to the league.

The two women who will participate in the event will be selected via a social media vote. Be sure to log on tonight and vote for your favorite player!

Tonight’s action starts at 8:00 pm est on NBCSN, CBC, Sportsnet and TVA Sports in Quebec. Stay tuned to our Twitter account, @WIH_Tribune, for live updates throughout the night!