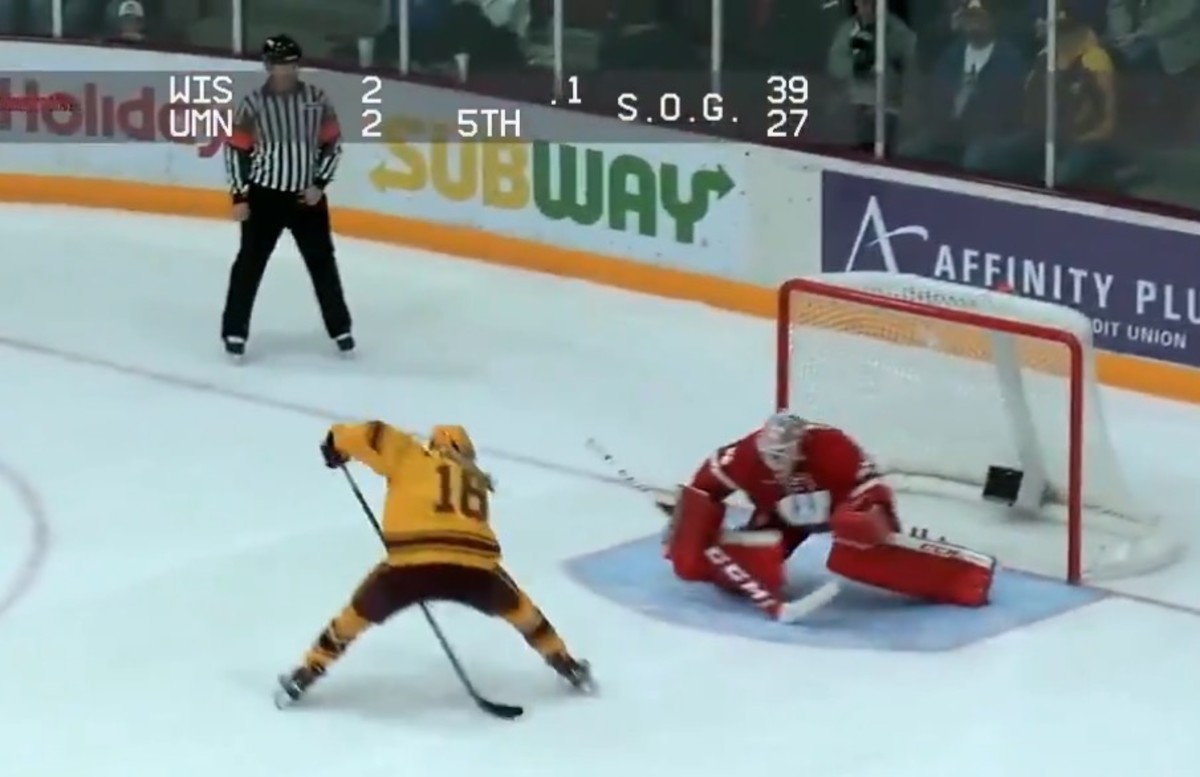 Will there be a new number one in the NCAA when the rankings come out later this week? The Minnesota Golden Gophers have made their case to jump ahead of the Wisconsin Badgers after they swept the defending National Champions this past weekend. Minnesota got a bit of revenge for last spring, when the Badgers edged them to win the NCAA Tournament.

The Golden Gophers doubled up Wisconsin on Saturday 4-2, weathering a first period barrage that saw the Badgers out-shoot Minnesota 10-3. Daryl Watts, the former Patty Kazmaier Award winner and transfer from Boston College, opened the scoring with her tenth of the season. Sydney Scobee stopped nine shots in the opening frame, however, giving her team a puncher’s chance.

Sarah Potomak (7:55) and Grace Zumwinkle (9:35) scored 1:40 apart to give Minnesota a lead they would not surrender. Zumwinkle scored her second of the afternoon, the eventual game winner, 4:51 into the final frame. Minnesota’s quick strike offense snagged another goal 68 seconds later, as Alex Woken put the Gophers up 4-1.

Presley Norby scored at 16:15 to tighten things up, but Minnesota held on for a key three points and a statement victory. “I thought our team played really, really well,’’ Gophers coach Brad Frost told the Star Tribune. “We took away their time and space for the most part.’’ That’s not an easy task. In addition Watts, the Badgers boast an impressive group of forwards that posses both speed and skill. Combine that with their hockey sense, and it is almost impossible to stop them. Minnesota accomplished that this weekend, however.

Over 3,000 fans attended Saturday’s tilt (Keep telling us no one cares about women’s sports though!). That crowd helped the Gophers as they made their second period push. “When you get that first one and the crowd gets going, there’s more energy on the bench,” Frost told reporters.

The Gophers and Badgers each got a point in their second game on Sunday. The Gophers struck first this time, as Taylor Heise scored 14:36 into the contest on a feed from Gracie Ostertag. The Gophers continued to use Saturday’s recipe, holding the Badgers off the scoresheet through 40 minutes. Wisconsin finally caught a break in the third, when Britta Curl scored an unassisted goal at 3:40.

Minnesota responded exactly two minutes later, as Potomak snagged her second of the weekend. Zumwinkle added an assist, her second of the game, to continue an extremely impressive weekend. People know she is a terrific player, but her performances this past weekend may have pushed her to a new level. She will be, on merit, in the conversation for Patty Kazmaier in the spring.

Dara Greig forced overtime at 7:01, but OT did nothing to get a final result. That pushed us to a shootout, something all of college hockey should be quick to adopt. Emily Brown opened the skills competition missing on a shot, giving way for Daryl Watts. The sniper also missed the mark, setting up the most exciting moment of the weekend.

Amy Potomak gave the Gophers the extra point on a goal that, quite frankly, you’d have to be under a rock to have not seen already. I’d try to describe it for you, but that wouldn’t do it justice.

That shootout goal provided the Gophers with the extra point, giving them five of a possible six on the weekend. The Gophers now lead the conference with 20 points, three ahead of the surging Ohio State Buckeyes. The Badgers are third with 13 points, just one up on Minnesota Duluth on this young season.

Will this weekend series be enough to push Minnesota over Wisconsin? I’m not quite sure that is how the voters will see it. After all, Wisconsin received all 15 first place votes in the USCHO poll last week. If I had a vote? I’d cast it for the Gophers. They proved over the weekend that right now, as of this moment, they are the better team.

Circle January 24th and 25th on your calendars. That’s when these two titans meet again. If this past weekend was any indication, it’ll be a helluva series.