Minnesota Takes Over As Number One Team In Nation 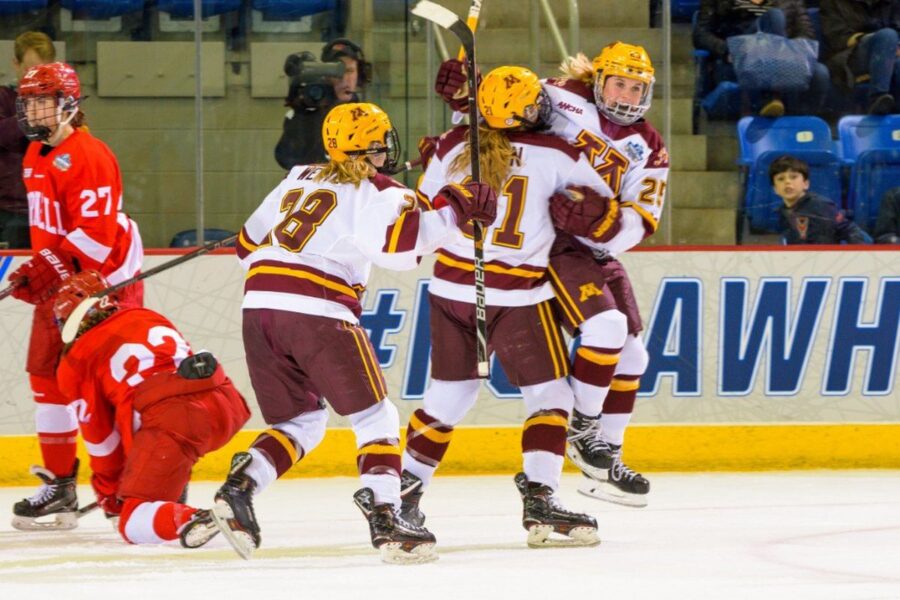 The Minnesota Golden Gophers are number one. In the latest USCHO poll, the Gophers received 14 of 15 first place votes to officially jump the Wisconsin Badgers. The Badgers, who are now 10-1-1 on the season, received one vote. Minnesota defeated Wisconsin twice over the weekend, taking five of a possible six points in their head-to-head matchups.

Cornell (3) and Northeastern (4) remained in their spots after strong weekends. The Huskies swept a home-and-home with Boston University, completing it with a 2-0 victory at Matthews Arena on Saturday. It was the first time since January that BU had been shutout, and the first time they were blanked at Matthews since November, 2011.

Boston College, who got four goals from Kelly Browne Friday against UNH, jumped from 7th to 5th. They swept their weekend as well, defeating UNH and Providence by identical 5-2 scores on Friday and Saturday, respectively.

Princeton also dropped a spot, falling from 6th to 7th in this week’s poll. The Tigers opened the weekend with a 1-0 win over Colgate, but dropped a 3-1 decision to Cornell in Ithaca on Saturday. They’ll have a tough ECAC weekend at home, as Harvard (RV) and Dartmouth come calling this weekend.

Ohio State, second in the WCHA with 17 points, remains 8th. Minnesota Duluth moved from 10th to 9th, while Boston University fell to 10th after a pair of losses to Northeastern on the weekend.

The USA Today/USA Hockey Magazine poll followed the exact same top ten. The only differences? Robert Morris received six votes as opposed to eight, while Minnesota got all 19 first place votes after their weekend against Wisconsin.

Minnesota, fresh off of a 9-0 exhibition victory over Division 3 Hamline on Tuesday, will play a pair of home games against Bemidji State on Friday and Saturday at Ridder Arena. The Badgers, meanwhile, will look to get back on track as they return home to face Minnesota State for a pair of games on Saturday and Sunday.

Cornell gets a tough test as they visit St. Lawrence on Friday night and then #6 Clarkson on Saturday afternoon. That game against Clarkson is a 3:00 pm puck drop and can be seen live on ESPN+. For our money, it is the featured matchup in women’s hockey this weekend.

Northeastern will face Holy Cross, who is winless, on Friday at Matthews Arena. Don’t be fooled, however. The Crusaders knocked off the Huskies a season ago for their only (and first D1) victory. That will be fresh in the minds of Dave Flint’s team. That is their only game this weekend.