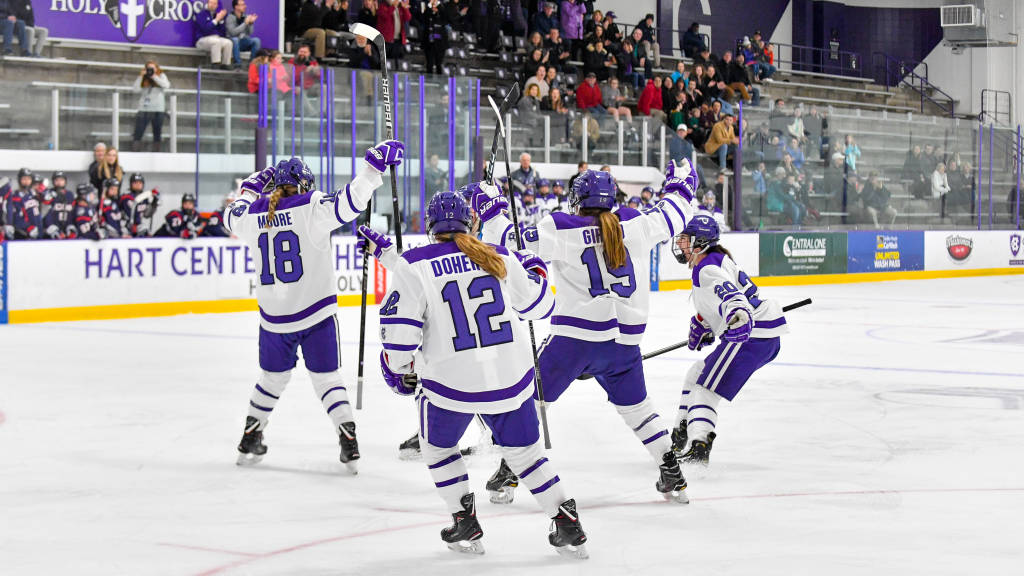 Moving forward, each and every Monday we here at The Women’s Hockey Tribune will have you covered on what went on over the weekend in the NCAA. We’ll recap the top stories, biggest games and look ahead at the week to come!

Let’s get started, shall we?

Congratulations to Northeastern head coach Dave Flint, who hit a pair of milestones over the weekend. Flint won his 211th game at Northeastern, a program record, on Friday night thanks to a 5-1 victory over UNH. On Saturday, Flint recorded his 300th win overall as a coach with a 1-0 win over the Wildcats in New Hampshire.

Gwyneth Philips made her first career start for the Huskies on Saturday. She stopped 20 shots in her first career shutout and victory. Another first for Northeastern? Peyton Anderson scored the first two goals of her career on Friday night in the 5-1 victory.

The weekend started with UNH scoring just 32 seconds in on a Meghara McManus goal, but the Huskies would score the next six in the home-and-home and claim the four points. Those points pushed Northeastern (7-1-0, 14 points) ahead of UNH (5-6-1, 11 points). The Huskies trail Boston College (9-1-1, 19 points) by five points for first place in the conference.

Give a lot of credit to the Holy Cross program. It’s not even Thanksgiving and they have already surpassed last season’s win total. The Crusaders went just 1-29-3 in their first season as a Division 1 program in 2018-19. This season, the Crusaders are 2-10-3 and just claimed a pair of conference victories.

The Crusaders scored a 2-1 victory at home over Merrimack on Thursday night before completing the home-and-home sweep with a 4-3 victory in North Andover on Friday. Rachel Moore scored 8:12 into the third period on Thursday to give Holy Cross the victory, while a two-goal outburst in both the first and second periods paced them on Friday.

Jada Brenon got the win in both games, stopping 33 shots on Thursday and 44 on Friday night. The wins took Holy Cross out of the basement in Hockey East for the first time, as they jumped the Warriors. The Crusaders are now just two points back of Providence for the final playoff spot in the conference.

#7 Ohio State and #10 Minnesota Duluth met in the only top 10 matchup of the weekend. Chalk this one up to the Buckeyes. Ohio State scored a 3-1 victory at home on Friday night, outshooting Minnesota-Duluth 41-34. Maddie Rooney made 38 saves in the loss, while Tatum Skaggs, Gabby Rosenthal and Emma Maltais all lit the lamp for the home side. Gabbie Hughes had the lone tally for the visitors.

The Bulldogs collected a point on Saturday, but Ohio State got the extra point thanks to a shootout victory on home ice. Both sides traded second period tallies, with Anna Klein opening the scoring for UMD and Sophie Jaques responding for OSU. Jenn Gardiner scored the lone shootout goal in the third round to propel the Buckeyes, who collected five of a possible six points on the weekend.

Expect Ohio State to remain firmly in tournament position in this week’s rankings.

#6 Boston College played just once this weekend, but took care of business against Boston University in a heated rivalry game. The Eagles knocked off the Terriers 4-2 at Walter Brown Arena on Friday night, maintaining their first place spot in Hockey East. BU is now just 3-4-1 in conference and currently 5th behind BC, Northeastern, UNH and UConn.

Speaking of UConn, a Hockey East Championship Game participant in 2018, they tied Vermont 2-2 on Friday night before edging Maine on Sunday by a final score of 3-2. It’s been a good start to the season for the Huskies, who are looking like a Hockey East playoff team yet again.

Wisconsin swept Minnesota State over the weekend, getting a tight 3-2 victory on Saturday before a dominating 6-1 decision on Sunday. Minnesota was equally as impressive, crushing Bemidji State 7-1 on Friday night and 3-0 on Saturday. The Golden Gophers continue to look like the best team in the nation and should remain number 1 when the rankings come out.

Tuesday night is going to be fun. We have a midweek top ten matchup as Northeastern heads to Boston College for the first meeting of the season between the rivals. Puck drop is 6:00 pm. Another all-Boston matchup sees #9 Harvard travel to Boston University. The Terriers were receiving votes in the last poll. Puck drop is 7:00 pm.

Next weekend will see an all-Minnesota battle, as the Golden Gophers take on Minnesota-Duluth Friday and Saturday in Duluth. Ohio State plays Colgate for a pair, while Boston College and UConn play a home-and-home set Friday and Saturday.