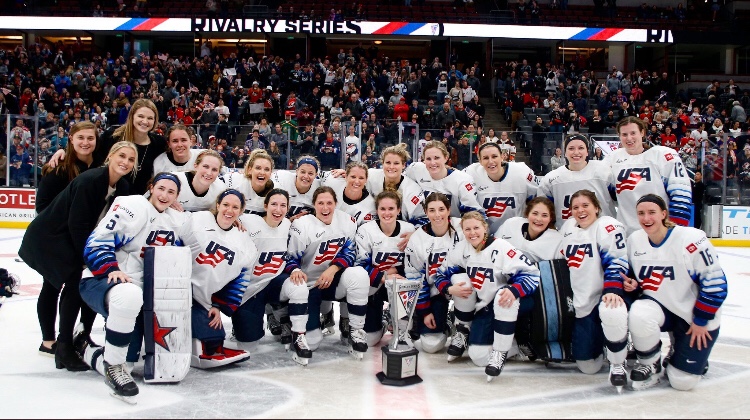 Team USA and Canada saved their best for the last. The record crowd of 13,320, which surpassed the previous mark of 10,158 for a 2002 game against Canada in Detroit, was not disappointed. Game 5 of the Rivalry Series felt more like a World Championship or Olympic Gold Medal Game than the previous four games. It was another thrilling game that saw the teams combine for more goals in one game than the previous two.

Leading the way for the Americans was Bozek and Emily Matheson. Bozek had a goal and an assist, while Matheson had two assists. Game four hero Hilary Knight, Dani Cameranesi and Monique Lamoureux-Morando each had a goal. Goaltender Alex Cavallini, who made her second start of the series, made 17 saves.

Knight finished as the leading goal-scorer for Team USA in the series with three goals and tied for the most points with four alongside Alex Carpenter, who had two goals and two assists.

Leading the way for Canada was Jill Saulnier, who recorded a goal and an assist, while Loren Gabel and Mélodie Daoust also scored for the Canadians. Goaltender Geneviève Lacasse made 26 saves in the loss to Team USA.

Unlike the previous two games, the Americans and Canadians wasted little time getting to know each other. Knight, the hero of Game 4 of the Rivalry Series, opened the scoring just two minutes into the contest redirecting Bozek’s point shot by Lacasse. 24 seconds later, Canada tied the game at 1-1 as Saulnier scored on a pass from Rebecca Johnston.

Early into the second period, Canada went back on top on a goal by Daoust. Her goal was set up Jessie Eldridge, who forced a turnover behind the American net and fed it to Daoust in front. The teams traded chances back and forth for the remainder of the period. As the game shifted into the third period, the Americans ratcheted up their efforts to tie the game. With nine minutes left to go in the third period, Lamoureux-Morando deflected Matheson’s shot from the point to tie the game at 3-3.

As overtime started, the Americans were relentless in their attack. Their hard work paid off as Bozek scored to lift the Americans to victory. The crowd inside Honda Center went nuts as Team USA celebrated with the trophy at center ice.

Of note, Marie-Philip Poulin did not participate in Game 5 of the Rivalry Series as she was injured in Game 4 on Wednesday night in Vancouver. Laguna Hills, California native Annie Pankowski was playing in front of friends and family Saturday night and she had an assist on Lamoureux-Morando’s goal in the third period.

The next time these two teams meet will be at the 2020 Women’s World Hockey Championships in Halifax, Nova Scotia.