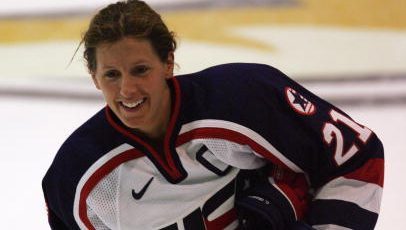 History was made on Wednesday when Cammi Granato was named the first ever female scout in the National Hockey League. Granato was hired by the NHL’s 32nd club, the yet-to-be-named expansion Seattle team. She was one of five pro scouts named by the club, joining Stu Barnes, Dave Hunter, John Goodwin and Ulf Samuelsson.

Granato has broken a major barrier, and is one of the few women in professional sports who has made her way into a front office. It’s a big deal. She’ll be a professional scout for the team, which likely means she’ll be part of the team that puts together Seattle’s expansion draft list. Being involved in that process is a huge deal. It will certainly be a great resume point should Seattle have success.

What’s even better? This isn’t some publicity stunt by the Seattle organization to get people on their side. They aren’t hiring Granato just to be the first team to hire a full-time female scout. She earned this role. “She may have the best resume of the entire group that we hired,” Francis said. “She’s been to an Olympics, she’s won a gold medal and a silver medal. She was inducted into the Hockey Hall of Fame in 2010. Her husband’s Ray Ferraro, one of the top analysts in Canada.”

Granato will be based out of Vancouver, and will see a heavy dose of the Western Conference. She’ll get the chance to scout potential players and get a close-up look at Seattle’s future division rivals.

Barriers continue to be broken in the sport of hockey. Granato is just the most recent example, joining Katie Guay and Kali Flanagan. With the ‘Dream Gap Tour’ underway and generating buzz for the women’s game, it certainly seems like there is momentum towards change. That change is leading to more opportunity. Granato opened yet another door on Wednesday, a door that could be used by many highly qualified women.